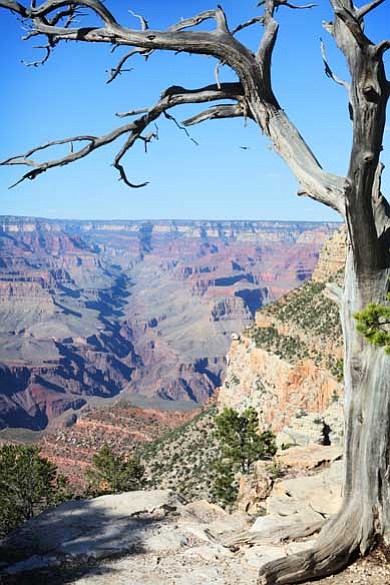 While going below the Rim may seem like the gold standard when it comes to hiking at Grand Canyon National Park, it's not the only option. For those seeking relatively easy day hikes overlooking the Canyon's grandeur, there are plenty of options along the Rim Trail.

A paved portion of the 13-mile trail runs along the Canyon's edge from Pipe Creek Overlook on Desert View Drive to Maricopa Point on Hermit Road - a distance of about five miles. For more ambitious hikers, dirt trails extend at either end - about a mile and a half east to Yaki Point, and some five miles west to Hermits Rest.

Of the five paved miles, about three and a half, between Pipe Creek Overlook and the Bright Angel Lodge, are highly accessible to wheelchairs and strollers. While this trail is mostly level, some people might find it difficult due to the elevation.

The paved trail beyond the Bright Angel to Maricopa Point is more strenuous. It is in poor repair and climbs about 250 feet in elevation in the first mile. The undeveloped portions are rough, often running through rocky drainages or splitting off into meandering social trails that can bring hikers disconcertingly (for some) close to an unguarded edge.

Yaki Point is accessible by shuttle, off Desert View Drive. Located about three quarters of a mile east of the South Kaibab Trailhead, it's one of the best places to watch the sunrise because of its location at the tip of a peninsula stretching far out into the Canyon.

Pipe Creek Overlook is a shuttle bus stop as well as a popular viewpoint with parking. Hikers can check out a map and

the view, then pick up the paved portion of the trail immediately west.

A half mile further west is Yavapai Point where a newly opened museum tells the geological story of the Canyon. Admission is free. There are also restrooms, a gift shop and shuttle bus stop.

Continuing west along the sidewalk and down some stairs, the Rim Trail picks back up for its most strenuous portion, steeply climbing the Bright Angel fault before leveling off.

Powell Point is named for one-armed Civil War veteran John Wesley Powell, considered the first explorer to journey down the length of the Canyon on the Colorado River in 1869. There is a monument to Powell's expedition here, with the names of three crew members that left the trip at Separation Canyon omitted. At this point, the paved trail ends and continues as a dirt path for five more miles out to Hermits Rest. Along the way are viewpoints like Mohave Point, where you can see the river and The Abyss, which earned its name because of its sheer cliff edge, 3,000 feet to the base of the redwall. The best vantage point is a few hundred yards west of the overlook at Pima Point, where you can not only see the Colorado River - on a quiet day you can hear it as well as it tumbles through Granite Rapids nearly a mile below. Also visible from here is Hermit Camp on the Tonto Platform.

The road ends at Hermit's Rest, named for the French Canadian prospector Louis Boucher, who lived there for more than 20 years around the turn of the century. In addition to mining, he also farmed in the Canyon and raised goldfish at Dripping Springs, about six miles down the steep Hermit Trail. The Santa Fe Railroad constructed the route in 1912 and two years later added the unique limestone building designed by renowned Southwestern architect Mary Colter. Today, that building is listed on the National Register of Historic places and, as in Colter's day, provides refreshment and a gift shop for sightseers.