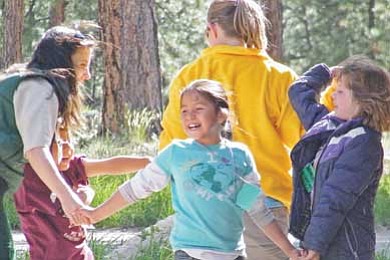 FREDONIA, Ariz. - Twenty children recently attended an overnight campout on the North Kaibab Ranger District of the Kaibab National Forest to learn about environmental issues and reconnect with nature.

Britt Betenson, one of the event's organizers, said the camp experience was educational as well as a lot of fun.

"The camp was designed to teach the kids about a variety of environmental education topics," Betenson said. "This was also an opportunity for the kids to reconnect with the Kaibab Plateau, which is this tribe's ancestral homeland."

Sleeping bags and some of the other equipment used were paid for with funds supplied by the USDA Forest Service's More Kids in the Woods program. The Forest Service contributed $500,000 nationally last year to the program with a goal of helping kids make the connections between healthy forests, healthy communities and their own healthy lifestyles.

The Kaibab National Forest hosted a similar event in 2009 with fifth-grade students from the Fredonia-Moccasin Unified School District.