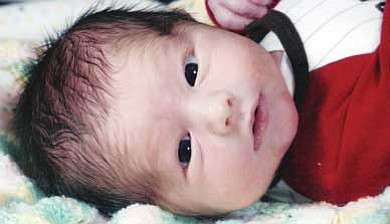 Michael and Kimberly Hutchins of Flagstaff, along with big sister Hailey, are proud to announce the birth of Diego Miguel Martinez Hutchins. He was born Tuesday, Nov. 16, 2010 at 5:11 p.m. in Flagstaff. He was 19 inches long and weighed 6.9 pounds. Diego's maternal grandparents, Dave and Carol Martinez of Williams, were present at his birth. Diego's paternal grandparents are Larry Hutchins of Las Vegas, Nev. and the late Carmen Lugo Hutchins. Michael and Kimberly are thankful for the gifts and all the prayers received from family and friends. Diego's parents are graduates of Williams High School's class of "94. Go, Vikes!