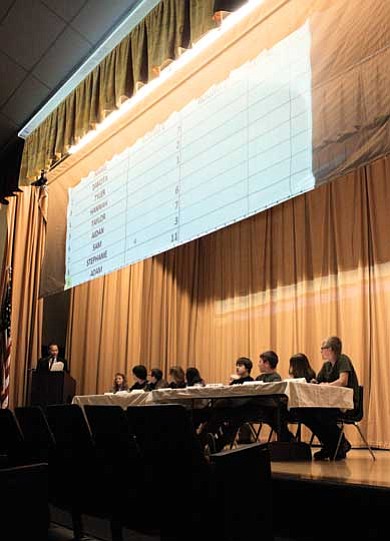 The inaugural Knowledge Bowl was held at the school last January, and this year's event was bigger and more exciting with better attendance.

The biggest change in this year's competition was the addition of the math Knowledge Bowl - a separate competition.

Each program had eight contestants. Both programs had had first-round qualifying tests before the competition began for the evening.

In the social studies Knowledge Bowl students were questioned in two 15-minute, Jeopardy-style question and answer sessions with the questions primarily based on the U.S. Constitution. The students used buzzers to signal when they wanted to answer.

WEMS social studies teacher John Lechtenberger served as the reader for the questions.

Adam Young was named as the winner taking the gold medal, a trophy and $50.

Dakota Beavers took the silver medal and $30 while Sam Mertz finished third with the bronze medal and a $20 prize.

Karen Macks, middle school math teacher, coordinated the math program. The winner of this event was Sam Mertz, the only double-medal winner for the evening.

The math event was arranged much like the earlier social studies event with the prizes, medals and honors following a similar format. However, in the math competition, students were allowed more time to calculate the problems after they were read.

Aiden Grantham and Michala Barrett were the second and third place finishers respectively in the math competition.

The Knowledge Bowl is part of the ongoing effort at WEMS to raise the academic standards in the school and at the same time spotlight some of the talented and gifted children in the school.

Refreshments were served in the cafeteria at the end of the program.