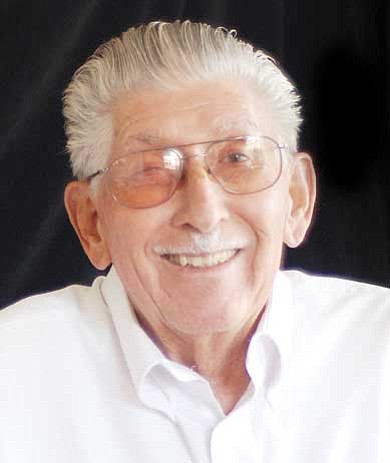 Tomas C. Martinez, 79, the charismatic and loving father, grandfather, uncle and friend to all he met, passed away in Flagstaff on Thursday, Jan. 13, 2011.

Tommy was born in Seligman on March 23, 1931 to Alejandro Martinez and Gabrielita (Casaus), the youngest of 10 children. As a child in the midst of the Great Depression, Tommy learned the value of both hard work and creativity, lessons he would impart to his children and grandchildren. He attended Seligman schools through high school, excelling as both a football and a basketball star for the Antelopes. He graduated in 1949.

Tommy enlisted into the United States Marine Corps in October, 1951, during the Korean War, where he served as a cook until discharged in November, 1953. After the service, Tommy worked for Central Commercial, a department store in Seligman. At this time, he also started his famous "Meat Shop" with cousin, Pete Maestas. The M&M Meat Shop was built in an abandoned boxcar that the cousins added a walk-in freezer and cutting tables to in 1957. They taught themselves to cut meat, and for 50 years, Tommy enjoyed many a cool drink with the boys ("Meat Shop Gang") in the refuge of the Meat Shop.

Tommy began working for the AT & SF Railroad in Seligman in 1962, where he was a car clerk. He moved to Winslow in 1985 with the railroad, and then finished out his two years before retirement in Phoenix in August of 1993.

Tommy's Chicken Fry, which began as a small event outside of Seligman in 1955 as a community event, grew to legendary proportions over the years as Tommy made the affair an annual tradition. Today, over 600 pounds of chicken, hundreds of attendants and every traveler on Route 66 gather the first Saturday of August to eat and enjoy the immeasurable warmth and hospitality of Tommy Martinez. Tommy was a man who breathed life and compassion into all who knew him, and the attendance at events such as his Chicken Fry speaks to his ability to reach out to each and every person in a way that was both personal and meaningful. There was a comfort in his presence, and if Tommy knew your name, you were family.

Tommy was an excellent cook who loved to hunt, and he took great delight in traveling to all of his grandchildren's activities, games, concerts and graduations. His family was his pride and joy, and his unfailing selflessness was almost tangible.

He is preceded in death by his parents, first wife and mother of his children, Esperanza Martinez, son, Michael, and nine siblings.

Services were held Friday and Saturday, Jan. 21 and 22, 2011. A Rosary was held Friday. A funeral Mass celebration was held Saturday at St. Francis of Assisi Catholic Church (104 Schoeny, Seligman, AZ 86337).

Condolences can be sent to the family at www.norvelowensmortuary.com. Arrangements are under the direction of Norvel Owens Mortuary.com.