Clean and Beautiful Committee tidying up Williams
Accomplishments numerous in 2010, new initiatives for 2011 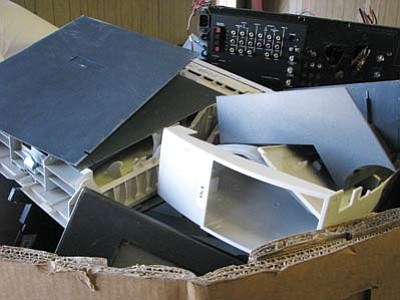 WILLIAMS - Last year was an eventful year for the Williams Clean and Beautiful Committee. The committee hosted two cleanup days, during which volunteers collected 20 tons of steel and tin from the public, 15 tons of steel and tin from the city, 2,000 pounds of copper products, 1,375 electric motors, 1,800 pounds of stainless steel, 3,000 pounds of various non-ferrous metals, 214 old appliances, and 365 tires. They also worked with the Coconino Juvenile Probation Office and raked up 117 55-gallon bags of pine needles at the cemetery.

The committee was also able to provide recycling bins to the schools, city offices and other city facilities.

Currently, Clean and Beautiful has a community glass and telephone book recycling program in place for 2011 as well as collecting paint due to donations from the Grand Canyon Railway and the city of Williams. Another project on tap for 2011 is the installation of asphalt pathways in Glassburn Park and working with businesses to install cigarette butt cans downtown.

According to Clean and Beautiful Chairperson Carol Glassburn, the most satisfying accomplishment for the committee has been their recycling efforts.

"This year, we are going to continue the momentum on the collection of scrap metal and tires and appliances," she said.

Glassburn went on to say that thanks should go out to Sheriff Bill Pribil. The Coconino County work crew worked 40 days in the community, which totaled over 2,900 hours.

"I would like to thank the Grand Canyon Railway, Cam-Dan Recycling, and the city of Williams for all their assistance during the year," she said. "Also, special thanks to all of our volunteers that helped on cleanup day and brought in their recyclables for collection."

The next cleanup date is scheduled for April 30. To be involved with the clean-up efforts contact Carol Glassburn at (928) 635-4503.