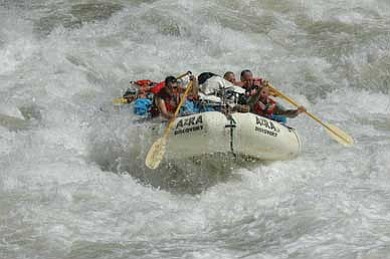 The five-year review shows NPS projections overshot actual demand for winter river trips by about 50 percent. The review also shows that roughly 65 percent of all self-guided river runners apply for the lottery in the five warmer summer months of May through September.

In the face of overwhelming demand for summertime self-guided river trips, the park's river concessionaires still account for roughly 500 summertime launches catering to 14,000 passengers. Only 2,000 self-guided river runners are allowed in the same time period, traveling on 180 launch permits.

In other released data, the NPS offers no explanation for the huge but very short spike in demand for self-guided river permits that occurs only in the second half of September. This spike, seen every year since 2006, occurs at the start of the time period that bars the launch of motorized tour boats. Application to the NPS lottery is not necessary for river trip passengers who use the park's river concessions. These passengers book available seats on known trip dates directly through a concessionaire.

Permits for the highly coveted self-guided Grand Canyon river trips in 2012 will be issued through Grand Canyon National Park's Main Lottery Feb/1-24. RRFW has posted an online primer on how to navigate the complex multi-step lottery application at http://www.rrfw.org/sites/default/files/documents/Grand_Canyon_Lottery_Primer_2010.pdf.