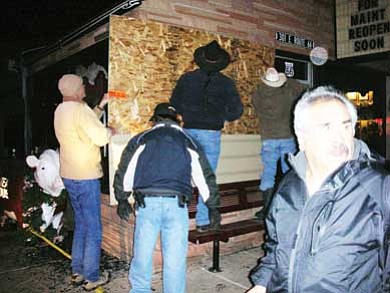 The horse became agitated when a loose American pit bull terrier chased the horse and carriage, carrying four people, down Route 66 snapping at its rear and front legs, still biting at the horse even after it crashed through the window.

According to Williams Police Department (WPD) Lt. Darrell Hixson, the pit bull's owner was exiting the Canyon Club when the dog saw the horse, broke loose from its collar, and proceeded to chase the horse into the window.

"The operator of the carriage did a good job trying to control the horse until it eventually just got too spooked and too out of control that the horse and carriage hit the front side of Rod's Steak House," Hixson said.

Fortunately, no one was injured during the incident. The horse sustained cuts and bruises to its nose and legs.

Ken Henry, owner of the Carriage Company, attended to the horse while the driver was taken to Flagstaff Medical Center as a precaution.

"They wrapped and treated the horse there and it was fine," Hixson said. "The people in the carriage were all fine as well."

The WPD is citing the pit bull's owner with what they say is customary for loose dogs.

"We cited her for what anyone would cite a person for when their dog is running free, so there is no special citation or anything," Hixson said.

Hixson went on to mention the strange irony surrounding these two animals.

"They told me that the horse several years ago was attacked by another pit bull in Phoenix when it was working, and the dog that attacked it this time has no front teeth because two years ago it was kicked by a horse, so these two were destined to meet," Hixson said.

Still, accounts made by eyewitnesses were not as lighthearted. One source, wishing to remain anonymous, said he still cannot get the image out of his mind.

"People were kicking the dog to stop him biting after the horse had hit the window, but the dog kept it up and the guy was yelling 'someone get that dog before he kills the horse' while trying to keep the people in the carriage," he said. "Finally another guy came along and picked up the dog. I never saw the female owner."

The source added that even though the viciousness of the attack was startling, the driver of the carriage handled the situation the best he could.

"For one, I would assume that the police will take action against the dog's owner before it causes a fatality and two, the driver of the carriage should get an award for saving those people. It was just a horrible, horrible thing," the source went on to say. "The horse couldn't defend itself because he couldn't see, and this dog just wouldn't let up, it was brutal to watch."

Owners of Rod's Steak House, Stella and Lawrence Sanchez, were stunned when they first saw their building after the episode.

"When I first saw the damage I was blown away," Stella Sanchez said. "When we parked the car and looked in the restaurant the damage just looked awful. I went to look at the horse and his shins were pretty bloody. I think he probably ran into the planter out front and then hit the window. I can't even imagine how it happened."

Sanchez went on to remark on how seeing the aftermath of the incident was unsettling for her.

"I didn't see any of it, but it was very nerve-racking to see all the damage," Sanchez said. "Glass everywhere. Cops everywhere. When we tried to get near the restaurant they wouldn't let us, because they said it was as crime scene. It was an icky feeling.

"I would hope that there would be no one in the street seeing this crazy dog attacking this horse. It would have looked creepy to people."

Employees at Wild West Junction helped Rod's get back on their feet as quickly as possible, supplying the restaurant with plywood and screwdrivers to board the windows.

"It was so kind of them to come and help," Sanchez added.

According to Sanchez, the estimated damage to Rod's Steak House is approximately $3,500. Luckily, the restaurant was closed for renovations at the time of the incident, and the owners are grateful there were no patrons in the building during the crash, which could have made the situation much worse.

On the other side of those affected, Henry is not happy with what their 17-year-old horse had to experience that evening.

"The only redeeming factor in this whole mess is that the dog didn't have any teeth," Henry said. "The horse is going to be okay. It really only suffered minor physical damage because the dog had no teeth."

Henry does not blame the dog for causing the chaos.

"The dog has a reason to hate horses if this has happened before. This horse has a reason to not like dogs because he was attacked in Phoenix. The dog jumped up and bit the horse in the scrotum and that one had teeth. My hard feelings are with the fact that the dog was loose in town and that the dog came out of that bar. That is what I am upset with," Henry said.

Henry went on to say that attacks like this should never happen in the first place.

"We have had dogs running at our horses before, but never like this. It could have been much worse. I just picked up the police report and apparently this dog has been cited before for being vicious dog at large," Henry said. "As long as I don't see that dog on the street and hear about it coming after my animals again, fine. If this happens again, the dog needs to be going away, that is all there is to it."

Henry estimates the carriage's damage is approximately $1,000. The Carriage Company offered a replacement ride to the family who were victims of the incident, and they rode the route again with the same driver after their visit to the Grand Canyon the next day.