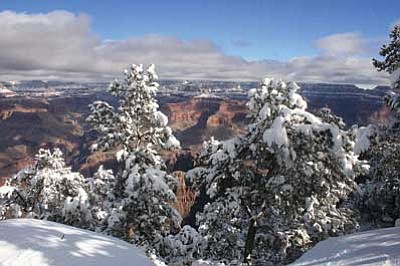 GRAND CANYON, Ariz. - Following a major snowstorm that immobilized northern Arizona late last week, the first day of the year brought record low temperatures, not only at the Grand Canyon, but throughout the region.

George Howard, warning coordination meteorologist with the National Weather Service in Bellemont, said low temperatures occur around sunrise because of gradual cooling during the night.

"This was a typical case of that," he said. "These low temperatures occurred very early in the morning on the first of the year. The cool air tends to pool in low areas. The cold air was pooling down toward the cleared area there at the airport."

Howard said the previous low temperature for the South Rim for this specific date was -1 degrees set in 1988.

"For a lot of locations around northern Arizona, the period for which we have observational data is fairly short because we haven't had instrumentation in a lot of areas for lengthy periods of time."

The weather service has taken temperature observations at the South Rim since 1966 but detailed information at the airport has not been available for as long.

"Even though that -29 degrees would technically be a record, we don't report it as a record because we don't have a large historical data base for the airport location," Howard said.

The stormy, cold weather was, according to Howard, produced by a high-pressure system moving into the area with arctic air associated with it. The trajectory of the storm came from well north of the region pulling arctic air south out of Canadian latitudes.

"While it is not unusual to get frigid air behind a snow system, this was uncharacteristically cold as you can tell by these temperatures," Howard said.

Bellemont recorded a morning low of -30 degrees. Window Rock hit -25 degrees, Munds Park began the day at -21 degrees and the Flagstaff Airport recorded -19 degrees as the sun came up Jan. 1.

According to the National Weather Service, between 12 to 18 inches of snow fell by Thursady morning with close to five more inches falling by Friday morning.