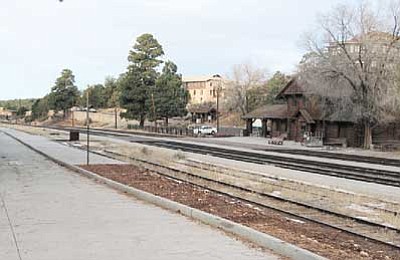 The project includes a one-way access road which enters the rail yard from a southeast intersection with Village Loop Drive and continues on the south side of the existing tracks; parallel parking for up to 10 tour buses operated by Xanterra South Rim LLC (Xanterra); bus and train loading/unloading passenger platforms running parallel to existing railroad tracks; and drainage improvements, erosion control, and signage. Parking lot D, which provided approximately 110 unimproved parking spaces, was removed as part of this project (additional parking spaces have since been added, under a separate contract, at the Grand Canyon Visitor Center).

As outlined in the Transportation Plan, the single lane bypass road along the railroad tracks will be closed to all but administrative traffic. The closure took effect after Jan. 1, when bollards were placed at each end of the roadway and directional signing installed. This section of road, combined with the new tour bus access drive will provide a link between the end of the current Greenway Trail system, east of the site, and Hermit Road to the west of the site - providing continuous bike and pedestrian access from the Grand Canyon Visitor Center to Hermit Road and adjacent Rim Trail.

With the closure of the single lane bypass road after Jan. 1, all visitor vehicular traffic will be required to circulate past the Maswik Lodge. This closure and change in traffic routing will be adaptively managed to ensure that it does not result in traffic congestion near Maswik Lodge.

Nearly 230,000 visitors per year arrive at the depot via the Grand Canyon Railway, which is an important component of the park's transportation system. Currently the Grand Canyon Railway, owned and operated by Xanterra Parks and Resorts, runs up to two trains per day to the park from Williams - saving approximately 300 daily vehicle trips during the peak visitor season.

Arriving train passengers have the choice to take a variety of bus tours offered by Xanterra or they can visit the park utilizing the park's free shuttle system or one of the many paved trails on the South Rim.

Previously, bus tours would load just north of the tracks in a small parking area off of Village Loop Drive adjacent to the Depot. Passengers visiting the park on their own walk north of the depot and cross Village Loop Drive to get to the canyon rim. The crosswalk is between the tour bus parking lot and staging area where buses waited to park and load. Therefore; for short periods during the day, there was considerable vehicle and pedestrian congestion in this area.

"With completion of this project, Grand Canyon Railway tour bus loading will now take place south of the railroad tracks mitigating much of the congestion north of the Depot, dispersing pedestrian traffic and improving safety," said Vicky Stinson, Project Manager for Grand Canyon National Park. "We're excited about the completion of this project, as it also greatly improves the integrity of the Grand Canyon Village Historic District, where the Depot is located and will provide a much improved experience for visitors arriving on the train."

Visitors should refer to The Guide, a free park publication for parking, shuttle bus and Greenway Trail information. The Guide is distributed at park entrance stations, visitor contact stations and is available on-line at http://www.nps.gov/grca/parknews/newspaper.htm.

For additional information and questions about this project, please contact Vicky Stinson at 928-638-7364 or Maureen Oltrogge, Public Affairs Officer, at 928-638-7779.