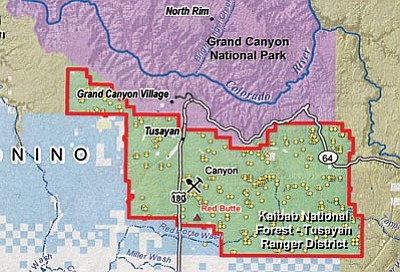 GRAND CANYON, Ariz. - Uranium mining near the Grand Canyon continues to stir debate among the public and officials in Washington.

On Feb. 17, the Department of Interior released a Draft Environmental Impact Statement (Draft EIS) for public review that includes four possible actions, one of which would remove 1 million acres from new mining claims.

Other proposed alternatives included in the plan would remove smaller parcels of land from mining claims and also include a no action alternative.

Secretary of the Interior Ken Salazar withdrew close to one million acres of federal land in the Arizona Strip and Kaibab National Forest for two years in 2009. He said the move was intended to allow time to gather scientific data regarding uranium mining in the area and to gather public input.

"With the input of local communities, tribes, stakeholders, and scientists, the Bureau of Land Management has developed four alternatives on which we encourage people to provide their feedback and views," Salazar said. "This process will help make a decision that recognizes the need for wise development of our energy resources, the importance of healthy lands and waters, and the voices of local communities, tribes, states, and stakeholders."

Roger Clark, air and energy director for the Grand Canyon Trust said the organization supports the full withdrawal proposed by the Secretary of the Interior on economic, ecological and pragmatic reasons.

"It's an incompatible use, really, with the mainstay of our economy in Arizona. We think it is good for the communities and good for the economy to make sure that we're not industrializing the lands around the Grand Canyon," Clark said. "If you look at all the mines that might happen in the next 20 years, there is the potential for more than two square miles of mining industrialized areas. And, that's a big area."

Clark went on to say mining operations will fragment the wildlife habitat, something Steve Clark, president of the Arizona Elk Society, said he agrees with.

"The membership of the Arizona Elk Society is concerned that mining in this ecologically unique area is not justified," he said. "The increase in roads and mining locations, coupled with the sheer number of workers in the area are certain to disrupt crucial migration and birthing area for elk and mule deer. Further, there is the risk to contaminating water resources of the area."

The Draft EIS was prepared by the Bureau of Land Management (BLM), acting as lead agency in cooperation with the U.S. Forest Service, the U.S. Geological Survey, U.S. Fish and Wildlife Service, the National Park Service, and other state and local agencies and in consultation with seven American Indian tribes.

Public input on the Draft EIS will be used to inform a final decision made by the Secretary of the Interior on the proposed withdrawal. In accordance with the National Environmental Policy Act, a notice published by the Environmental Protection Agency in the Federal Register initiates a 45-day public comment period.

Denison Mines (USA) Corp. (Denison) operates the Arizona 1 Mine located on the Kanab Plateau in Mohave County, Arizona, approximately 35 miles southwest of Fredonia on 19.4 acres of BLM land. The mine has a production rate of 109,500 tons per year of uranium ore and was originally developed in 1988 with initial work conducted in the late 1980s and early 1990s.

The Arizona Department of Environmental Quality (ADEQ) is currently considering applications by Denison for Class II Air Quality permits for the Pinenut and EZ mines, both located on the Kanab Plateau approximately 30 miles southwest of Fredonia, and the Canyon Mine, located on the Coconino Plateau about six miles southeast of Tusayan. Denison is also seeking a water quality General Aquifer Protection Permit (APP) for the EZ Mine.

According to information provided by the ADEQ, the decision by the Secretary of the Interior to suspend new uranium claims near the Grand Canyon does not include the existing claims of the Arizona 1, EZ, Pinenut and Canyon mines.

As many as 10,000 mining claims exist on federal land near the Grand Canyon for all types of hard-rock exploration. Close to 1,100 uranium mining claims are located miles from the park's boundaries.