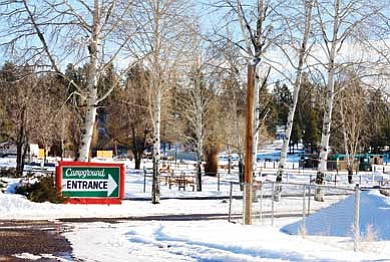 TUSAYAN, Ariz. - Step by step, land development in Tusayan is becoming a reality.

During the Feb. 2 Tusayan Town Council regular meeting, members voted unanimously to approve a motion regarding the reimbursement of planning costs by Stilo Group to the town. Vice Mayor Cecily Maniaci made the motion, while council member Bob Blasi seconded the motion.

According to a staff report, Interim Town Manager Cynthia Seelhammer will procure funds from Stilo group on behalf of the council in order to cover costs relating to third party consultant expenses. The move is intended to save taxpayers the expense of professional management, planning and legal fees and other costs associated with land development.

Stilo Group has agreed to deposit approximately $25,000 a month into the restricted account. Deposits will end once planning and advising meetings have ceased.

The staff report also contends it is common for land developers to fund planning studies and negotiations.

Tusayan Mayor Greg Bryan said the funds would be used for a variety of purposes pertaining to land development costs.

"That would include a land planner, and attorney and management and maybe associated experts in regard to elements of that development agreement," he said. "The intent, as was noted, is that anything that is associated with the cost of this negotiation would be paid for by them."

The council will hold weekly private meetings with representatives from Stilo Group until an initial agreement can be negotiated regarding the development of Kotzin Ranch, Camper Village, and Ten X. The agreement will then be placed before the council during a public meeting.

Bryan also said Stilo has proposed development of the 10X parcel, outside Tusayan city limits, which could require annexation.

"Their request as it was brought to us, is to annex 10X and to zone it or to do whatever that would be, part of that development agreement," Bryan said. "That agreement would then be brought back to the town council to openly discuss and review and take action."

Responding to the concerns of the public, Councilman Bob Blasi said he is aware of the surrounding controversy regarding this development issue.

"We don't want to make a mistake with this decision. This is going to be the most questioned decision in the next couple months," he said. "That being said, the voters of this community voted for us because they have faith that we will do the right thing."