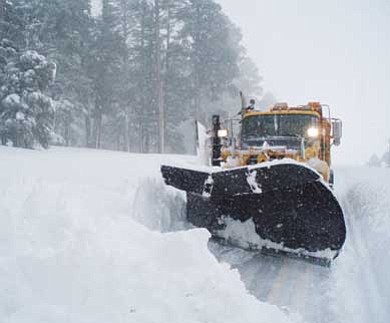 PHOENIX - The New Year was ushered in with a winter storm that wreaked havoc on much of Arizona. Cold temperatures and heavy snow tightened their grip on the state, while major highways were closed to keep travelers safe. The storms have subsided, for now, but the cost to battle them has already amounted to well over a million dollars for the Arizona Department of Transportation (ADOT).

So far this season, snow and ice removal costs have amounted to approximately $1.7 million. That includes the $900,000 spent on the storm during the week leading up to the New Year's holiday. Costs include labor, materials, and equipment for snow and ice removal.

"Our winter safety operations are something we plan for year-round, and while we have a budget for snowplowing, that budget often depends on the intensity of the winter weather," said ADOT Director John Halikowski. "Public safety is ADOT's top priority. Our mission is to respond quickly to clear the roads and provide safe driving conditions for motorists. We do that with very limited state funding. If we need to spend more than our designated budget to keep snow cleared from our state highways, we'll have to assess whether that will have other budget impacts down the road."

Over the last two years, ADOT was forced to address a $100 million budget gap caused by declines in revenues and legislative transfers as part of the state's overall budget deficit challenges. This reduced operating budget required highway operations activities to be prioritized to focus on public safety first.

ADOT continues to repair highways damaged by snow and ice during storms last winter. Beyond the operational costs, the winter storms were responsible for approximately $18 million in damages. The Federal Highway Administration's Emergency Relief Program will reimburse that entire amount as projects are completed. So far, ADOT has performed about $3.8 million worth of repair work.

Guest column: Snowplowing will continue - for this year
ADOT urges caution around snowplows
Tow truck out of service near Parks after incident with semi-truck
Winter is no joke: Gov. Ducey encourages northern Arizona drivers to 'Know Snow'
US 180 closing north of Flagstaff
Event Calendar