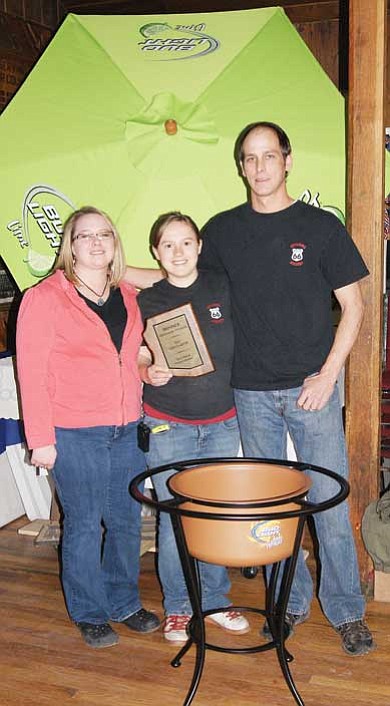 Photo/Chuck Vaughn<br> Nicole Raycraft of Twisters (center) smiles after winning the red division. Her bosses — Twister’s owners Stefanie and Jason Moore — also entered and were on hand to congratulate her.

WILLIAMS - More than 50 people came to the American Legion Hall Sept. 29 to taste nine versions of chili created by local home cooks and restaurants. The chili cook-off - sponsored by the Northern Arizona Barbeque Festival and Bud Light Lime of Golden Eagle Distributors - was a fundraiser for the July 4 barbecue scheduled for July 1-2.

More than $275 was collected on behalf of the barbecue. Monies from the barbecue benefit Special Olympics of Arizona and the Williams Main Street Association.

"We want to thank our hosts, the Williams Legion, and also our sponsor, Bud Light Lime from Golden Eagle of Flagstaff, along with all the folks that came out to enjoy the delicious and sometimes hot chili," said organizer Chuck Vaughn.

Entries for red and verde in the regular division were Jim Robertson and Gary Arend of Lazy Hog; Chuck Vaughn of Cowboy "Q;" Paul Bestenheider and Johnny Gomez of Wild West Junction; and David Haines of Red Raven. Haines won the red division and Bestenheider and Gomez claimed the verde.

"We were hoping for more teams, but for a first event we were very happy and the people who came out seemed very pleased with the sights, the tastes and the wonderful smells that filled the Legion Hall," said Vaughn. "Our next event is scheduled at Poncho's in March. See you all there."

Judges for the event were Mayor John Moore, Connie Hiemenz, Kent Jones and Rebel and Mike Grimm. Moore excused himself from the restaurant division judging. Joel Ybarra of Golden Eagle joined the judges to help choose a winner.