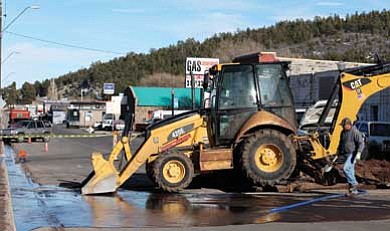 WILLIAMS - Last week saw extremely cold temperatures in the region for the second time this winter with lows of two below zero recorded in Williams Feb 2.

Making things more uncomfortable, wind chill hit as low as 35 below zero in some areas. The Weather Service posted an official wind chill warning Feb. 2 through the morning of Feb. 3.

According to George Howard, warning coordination meteorologist with the National Weather Service in Bellemont, the frigid air that settled into northern Arizona was the result of a large storm moving south out of Canada.

Howard said the trajectory of the storm was somewhat unusual and was a much larger weather producer in the Midwest and eastern portions of the US. For much of the fall and early part of the winter, high pressure off the coast of California has forced storms north into the pacific northwest.

"When storms would come around the top of it they would plunge nearly due south," he said. "The air was unusually cold."

Most of the time, arctic air associated with storms from the north is held up before reaching northern Arizona.

"It is impeded by the front range of the Rocky Mountains and the mountainous terrain in new Mexico," Howard said. "This came out of Canada a little further west than typically and just had a lot of momentum behind it. So, it carried further south and further west than it normally would. And then we had the wind on top of that."

Howard went on to explain that wind chill can be thought of as a measure of how quickly heat is removed from something.

"If you've got no wind, heat will drain out of a person's fingers or face fairly slowly because there is no air moving the air next to your skin away and replacing it with cold air," Howard said. "If you start throwing in wind and kicking those speeds up, you start losing heat at a much faster rate."

The cold snap may have caught some area residents of guard.

James Grantham, Williams Water Treatment Facility foreman, said it has been a busy 2011 for his crew responding to frozen and burst water pipes.

"I've really lost count," he said. "It's tough to put a count on it but, I would say we've probably been on, between New Year's and this last weekend, about 60 calls in town for people's pipes freezing. It's been pretty hectic. A lot of busted pipes."

Once pipes freeze, it's time to call a plumber.

Along with residential freezes, the city of Williams has experienced its share of frozen water lines as well.

"Once in a while, it's us. One of our meters will freeze if it is up high," Grantham said. "Sometimes, even if it's insulated it will freeze. But, most of the time it is the customers issue."

After last week's cold spell, most area residents are likely looking for a little warmer weather. And they're in luck.

The Climate Prediction Center forecasts a temperature pattern over the next few months typical of a La Nina pattern in most of Arizona.

"You're talking a pretty good likelihood of above average temperatures over the next two or three months," Howard said.

Cold front brings high winds and freezing temperatures to Williams
Monsoon precipitation up in the air
High and dry? How to handle those pesky frozen pipes
Dec. 31, 5 p.m. update: Winter storm to bring snow and cold temps to Williams, Grand Canyon
Boo and brrr: A chilly Halloween in store for Arizona this year
Event Calendar