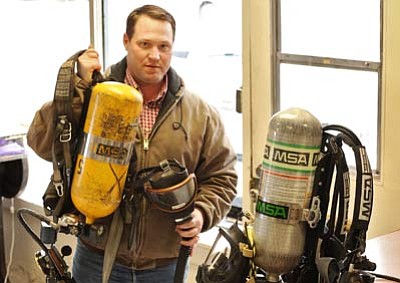 Williams Fire Chief Jeff Dent is pleased with the new purchase, saying there have been significant changes to the packs.

"There have been quite a few new standards since we last bought them, the main ones are just some additional check valves that are standard on them now," he said. "There is a personal alarm safety device that standard on them now. Also, a telemetry device added in to them that also can track what is going on with them as they are using them."

Dent said the packs not only provide oxygen but they also help locate firefighters while they are inside a burning structure.

"Somebody outside can keep an eye on their oxygen level, where the pack is at, whether it's moving and then if someone goes down it helps to locate them from inside the building," Dent said. "It tracks where their movement is within the building. So that is moving up from where we were before."

A lack of grant funds was responsible for WFD being forced to make due with old packs. The new packs were purchased at a considerable discount.

"We have been trying to get a grant the last couple years without success," Dent said. "The reason we got these at such a good price was because Phoenix Fire Department just recently purchased new packs under a new contract. Dräger is the company they went with, and part of their contract with Dräger was that they had to offer that same price to the rest of the state. A couple of other companies that were trying to stay competitive offered similar pricing."

Because of the discounted pricing, WVFD was able to stay with their favorite brand, MSA, paying about 50 percent less than the regular cost.

"We stayed with MSA. It was the same brand that we had before," Dent said. "But we looked at everything. We got to play with every new pack out there. It was definitely a good time to buy fire packs and we got a good deal on them."

The added benefits from the new air packs go far beyond the noteworthy price. They are also a much more manageable weight and include exceptional safety features.

"We went from a 30 minute pack to a 45 minute pack and they are still about six pounds lighter a pack, because they are composite bottles and our old ones were steel," Dent said. "That's the nice thing about them is the additional safety features. They are also a lot easier to get in and out of, which is a plus."