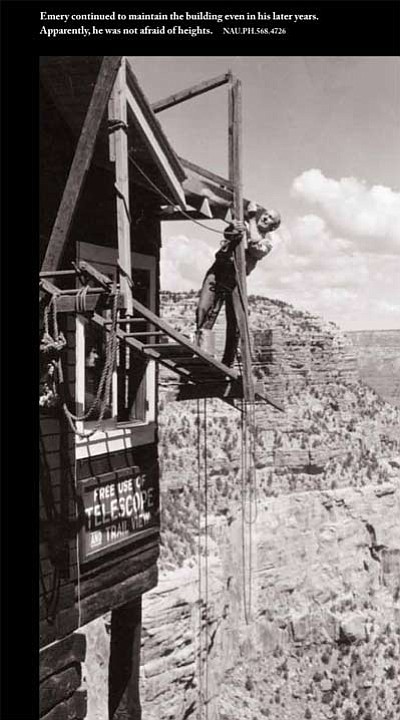 Photo courtesy Grand Canyon Association<br> A portion of one of the panels on display through Sept. 4 at Kolb Studio focusing on the Kolb Brothers’ life at the Canyon.

GRAND CANYON, Ariz. - Grand Canyon National Park has a long and storied history but, even before the park itself was established, Ellsworth and Emery Kolb built a house perched precariously on the edge of the Canyon, becoming one of the first concessionaires while creating an enduring legacy on film.

While the Kolb brothers have been included in exhibits on the Grand Canyon in the past, a new exhibit at Kolb Studio on the South Rim presented by the Grand Canyon Association (GCA) marks the first time an exhibit has been solely devoted to the brothers. The Amazing Kolb Brothers, A Grand Life at Grand Canyon opened Dec. 19 and runs through Sept. 4. The opening reception takes place Jan. 4 from 10 a.m.-noon.

Why the legendary brothers have yet to be featured at Kolb Studio, or anywhere else for that matter, is a bit of a mystery. The two arrived at the Grand Canyon from their home near Pittsburgh in 1902, 17 years before the establishment of Grand Canyon National Park. Avid photographers and adventurers, the Kolbs were the first to document a boat trip down the Colorado River, through the canyon, with a movie camera. The film was shown to visitor to Grand Canyon from 1915 until 1976.

Helen Ranney, GCA associate director of philanthropy, said the time is right for an in depth look at the Kolb brothers' legacy.

The exhibit began to take shape when Ranney received a phone call about a year ago from a former Grand Canyon National Park Ranger named James Schenck.

"He called me out of the blue and said 'what about doing an exhibit on the Kolb brothers. It's the 100th anniversary of the river trip. Somebody's got to do something,'" Ranney said.

The exhibit highlights the Kolb's house which sits at the start of the Bright Angel Trail.

"It's a beacon when you're hiking out, when you're turning that last corner on the bright Angel trail," Ranney said. "There are a lot of visitors who don't know who the Kolbs were. That a little girl grew up there and these two brothers really, as far as we're concerned, encompass all things Grand Canyon. River, hiking, adventure, family, business - they were early pioneers. They were there before the park."

The house, owned by the Park Service and cared for by the GCA, currently houses a gift shop and gallery in the top floors. The bottom floors, not open for public viewing, remain largely as the Kolb's left them.

"It's the jewel of the park, I think," Ranney said.

The current exhibit is meant to bring the Kolb brothers to life. A computer projector will play a 10-15 minute silent loop of a digitized version of the Kolb's famous river expedition film.

Panels depicting the Kolb's life at the Canyon will line the walls and various artifacts will also be on display including cameras, tripods, dishes from the family and more.

"It's another way to connect people to the park," Ranney said. "Because, different things connect people and I think one of the various components of their story is going to touch somebody."

The exhibit is the product of the efforts of many volunteers along with GCA staff. Jerilee Grandy was instrumental in completing a Kolb family tree while Historian Richard Quartaroli, with the Cline Library, and Scott Thybony worked to produce all text for the presentation.

Ranney said many in the community have waited for an extensive look at the life of the Canyon pioneers.

"This one holds special meaning in a lot of people's hearts and minds," she said.