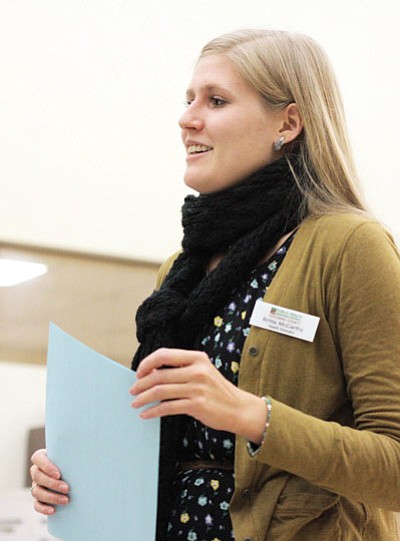 WILLIAMS, Ariz. - After two years without sex education, Williams Elementary-Middle School (WEMS) eighth graders could likely see an abstinence-based curriculum in their PE or health class, beginning as early as next semester.

"There is a definite need," Savage said, during a public meeting presentation by Coconino Health Department Health Educator Britta McCarthy on Dec. 8. "Some of the girls, who are now eighth graders, had a couple of lessons first semester of their sixth grade year, and that is when I got here. So I'm not sure what happened before that. I don't think it was as organized and I don't think it was that complete of a program."

McCarthy said Coconino County are using Making the Difference Curriculum because they have a variety of funding sources, and they are more likely to work with organizations that use "educational best practices." Potential programs are considered best practices if they have gone through rigorous evidence-based studies and Making A Difference meets those requirements.

The county's model, following legal requirements, is Apache County Health Dept, because of their successful implementation of the evidence-based program.

"Evidence-based means that there was significant financial backing at some point to have a study done," McCarthy explained. "They could have a control group and a group of students go through the program and then to follow ups at three, six and nine months to determine the program was effective in delaying the onset of sexual intercourse."

The students who received the curriculum were less likely to report having sexual experiences at the three-month follow-up than the control group, she added.

There are only 47 eighth graders at WEMS and because of Arizona state law, the program is 100 percent opt-in.

"So we can't even begin facilitating it, until we know that all of the parents' have given us active permission to do so," McCarthy added.

The proposed curriculum has three major components. The first focuses on student goals, dreams and adolescent sexuality. The second on sexually transmitted diseases and teen pregnancy, covering the beliefs and attitudes about abstinence, HIV, STD, and pregnancy and the third component focuses on "skills and self-efficacy," covering "negotiation and refusal skills, and provides time for practice, reinforcement, and support."

After completing the Making A Difference course, their website said students will have an "increased knowledge about prevention of HIV, STDs and pregnancy; more positive attitudes/beliefs about abstinence; increased confidence in their ability to negotiate abstinence; increased negotiation skills; stronger intentions to abstain from sex; a lower incidence of STD/HIV risk-associated sexual behavior; and a stronger sense of pride and responsibility in making a difference."

The curriculum also recognizes parents as primary reproductive health educators by encouraging conversation with their children.

For high school students, the county recommends another evidenced-based program called "Reducing the Risk," which is a more comprehensive module.

A second public meeting begins at 5:30 p.m. on Thursday in the WEMS library, 601 N. Seventh St. Interested individuals can find the Making the Difference curriculum general overview online at www.selectmedia.org.