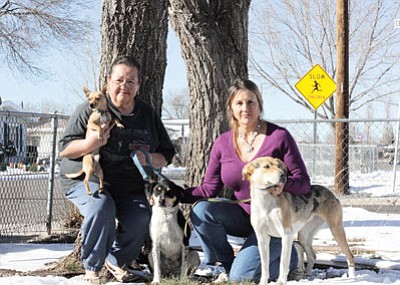 Born on a ranch, the sisters were only 8-months-old when their owner was diagnosed with a life-threatening illness, and had to give them up in April.

Since then, Kate and Onnie were living on the go, jumping around several SAVE-Meant To Rescue foster homes before Patricia Barrio took them in. She fell in love with them from the moment she looked into Kate's striking blue eyes, she said.

The dogs found a lasting place in Barrio's home, who, after the recent passing of her husband, struggled with the solitude of an empty house. Kate and Onnie gave her the comfort she needed.

"They are like little kids, I think, in my heart," Barrio said. "They went from place to place, they don't know what to do, and they just want someone to love them. They make it easy for me to give them that love."

Barrio, who took over fostering the teenage dogs four months ago, said the decision to permanently adopt them was an easy one.

"This is their early Christmas present, as well as mine," she said. "They are beautiful, beautiful dogs."

Robynn Eckel, who runs the local dog rescue group SAVE-Meant to Rescue, said it was important for her to see them adopted out together.

"They were kind of backwards dogs because they had never been socialized. They were always alone in the country so they never acquired the social skills they needed to adapt to city life," she said.

Kate and Onnie are part of the fortunate few who found a caring family. Eckel said that now more than ever, dogs in the local area are in need of a permanent, loving home.

"The adoption rate at the Coconino Animal Shelter are way down, and that's not good," she said. "Until we get our facility up, we need more people to step up and foster dogs just like Kate and Onnie."

Eckel also stressed that, as winter hits Williams, it is every dog owner's responsibility to ensure their companions have refuge from the wind, rain and snow. Younger dogs and cats can't regulate their body temperature as well as adults, so extra attention is needed to make sure they don't develop frostbite or hypothermia during the harshest months of the year. That applies for older or sick animals too, because they are also vulnerable.