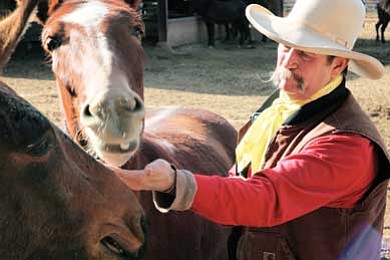 GRAND CANYON, Ariz. - The term 'management' conjures images of corporate executives delegating duties in a sterile office environment. But Max Johnson's definition of the term is a lot different. And, it involves mules.

Previous to his current stint at the Canyon, Johnson worked for various outfitters on ranches in Wyoming and South Dakota packing mules into hunting and fishing camps.

"When I come back last September, as the manager and assistant manager moved up and left and all that I just put in for manager and got it," he said. "It's an elimination deal is really how it works."

Johnson said his current position puts him in contact with corporate management, something he has not dealt with in any of his past positions.

"They do things different," he said.

Johnson said most people get to know pretty quickly that he's what he calls "a little outspoken."

His boss, Nora Berry, director of transportation for Xanterra South Rim, said it is hard to find someone with a management background that doesn't come from a corporate environment.

"The fact that he's got a strong background in the livestock field and a love for the animals, you can't replace that," Berry said. "I can teach him how to do payroll and administrative tasks. But, what he brings to the table is amazing. It is very difficult to fill that position with someone who has both."

Johnson said Berry has been helpful with the transition to corporate life.

"If I see something that's not going right, well, I say it. I'm not as diplomatic as I should be. But, she's trying to get me trained where, 'you can't say that' or 'you can't say this.' I'm still trying to get used to it. I don't know if I ever will. How long will I be here? Well, that's a good guess. If I don't learn to behave it will be quicker than I thought."

Although Xanterra runs mule operations, the buck eventually stops with the Park Service.

"If the Park Service doesn't want to do it, we don't do it," Johnson said. "The Park Service is really easy to work with. I don't have to deal with them directly."

Of the 124 mules located at the Livery Barn, 72 head hit the trail daily in the summer. Up to 10 visitors get a ride to Phantom ranch during peak season cut down from 20 three years ago, 40 people take day rides in summertime. The Head Packer and two more packers take 10 pack mules and two riding mules per day to Phantom Ranch as well.

Most of the mules were purchased from Reese Brothers Mule Company in Tennessee.

The mules aren't necessarily fully "broke" when they arrive at the Canyon. Johnson said everybody at the barn rides the mules to insure they are ready for visitor riders.

"As they calm down and relax and are used to going down the trail single file behind each other we put them into what I call the 'dude string' for the tourists," he said.

In the past, pack mules were purchased for packing that weren't fit to ride - what Johnson called 'not quite house broke.'

"As long as I'm here, I'm not going to buy those type of mules because they have one purpose," he said. "If you have mules that you can pack and ride, you've got a lot better mule I think."

What it takes to keep it running

"They're always doing something," he said. "Raking the rocks off. The rain will wash it out and they've got to put new dirt down or rocks."

Charles Berrong, a full-time Ferrier at the barn shoes every mule once every four to eight weeks.

"It keeps their feet and legs healthy," Johnson said. "If he's shoeing and finds something wrong with one of them, then they go right straight to what we call the sick pen until they're not limping or whatever."

Johnson calls Equine Therapist Rene Noriega out of Tucson when some of his mules get a little sore.

"He's a chiropractor for mules and horses," Johnson said. "He's been up here four times since February. You can tell they're sore by the way they walk. You know, how people get. We'll get a hand full of them mules and he comes up here. He'll adjust them and lay them off for a day and they're right back to work. It's amazing. He'll go down the backbone and they'll just wilt."

Noriega works on even the more ornery animals at the Canyon.

"We've got mules down there in the pack barn that would just flat rather kick you're head off more than anything else and they'll be sore and we'll bring them over to the shoeing barn and we tell him this one will kick you," Johnson said. "He monkeys with them for a little bit and pretty soon he reaches down and grabs the back leg and stretches it out and they never, not one tried to kick him. It makes them feel better I guess."

Johnson said his main priority in the New Year is to continue making working around the Livery Barn, whether you're a mule or a person, a pleasant experience.

"We'd like to make it better around here for everybody one way or the other," he said.