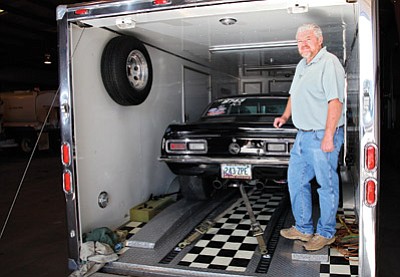 Ryan Williams/WGCN<br> Larry Pittenger stands in front of his 1968 Camaro before heading to Phoenix to compete in the King of the Track racing event held at Speedworld Dec. 10. Pittenger placed third at the race.

Pittenger races a 1968 Camaro with a 710 horsepower, 397 small block engine close to two weekends a month. He has been back racing for four years after a 37-year hiatus.

This year has been a good one for Pittenger. In February, he placed second in an Arizona Drag Racing Association event in Phoenix. Pittenger then won the Super Chevy event held in Las Vegas in May, winning eight runs to reach the top of the field.

In August, Pittenger, who said racing is a stress release from his business, took a vacation to Boise, Idaho.

"Of course, I took the RV, car trailer and car with me," he said.

Due to the difference in elevation, Pittenger said it took awhile to get a car "dial" but was able to place third out of 125 on the last day of competition.

The "dial" drivers are required to put on their cars is essentially a handicap to level the playing field - much like a golfer's handicap. Pittenger generally runs a quarter mile in 10.40 seconds at 130 miles per hour. After a few practice runs, he has a pretty good handle on how fast he will run for the day - plus or minus tenths and hundredths of a second - and sets his dial accordingly. The three lights will fire at different times making each race equal.

"Then you need to cut a good light at the starting line," Pittenger said. "A perfect light is 0.00 seconds. You want to get as close to a perfect light as you can. If you leave too soon you go 'red light' and you're done for the day."

Following success in Boise, Pittenger made his way to Pacific Raceway in Seattle.

"I put a lot of runs on the car there," Pittenger said.

Over the course of three days of racing, Pittenger steadily knocked out his competitors, eventually making the final round and placing second. The difference between a win and a loss often comes down to tenths of a second, or less. Pittenger said he went .010 seconds red one day and was just .002 of a second too slow the next. Pretty consistent driving.

"It was a lot of fun," Pittenger said. "Other racers wanted to know where the hell I came from. I tell them Williams, Ariz. I'm putting Williams on the map."

Pittenger said his biggest day of the year was Nov. 19 at the ADRA Memorial Race. He went eight rounds to win the Pro Class and then went up against the Super Pro winner. He came out on top, cutting a .011 second light and running 10.438 seconds against his 10.42-second dial. Pittenger's name is now engraved on a traveling trophy that will grace his office for one year.

"I'm still on cloud nine," he said. "It's going to be an honor to have my name on that trophy. There are a lot of good racers in Arizona."

Last weekend, Pittenger headed back to Speedworld in Phoenix to run for King of the Track against all the winners at the raceway in 2011. Despite a car blow up in the race just before his that spewed oil up and down the track, Pittenger managed to place third overall. Before making the finish line, Pittenger's car spun sideways. How much did he lose by? Just .0007 seconds.

Pittenger said he has had a lot of help in his racing pursuits.

"I have been so blessed," he said. "I would like to thank my Lord, my wife Lori and my family. They do the work while I'm off playing sometimes."

He added that some of the guys at L.P.'s have helped with work on the car. Howard Devore, his engine builder, has also been instrumental in his success.

Pittenger hits the track with other drag racers in Williams a couple times a year as well.

"We have a lot of racers in this town and it makes it fun when we all get together," he said.

Not everyone is happy about Pittenger's racing success, though.

"My golfing buddies are mad at me because I will race before I hit the golf course," he said.