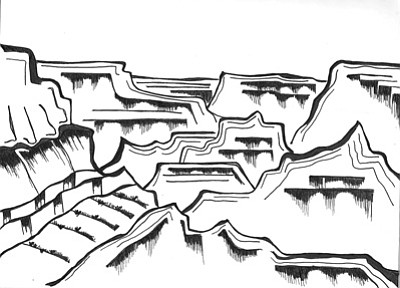 Submitted artwork<br> Filmmaker, animator and screenwriter Laras Feliciano works in a variety of mediums. Pictured is a sketch she recently completed while in residence at the South Rim.

Feliciano is the National Park Service's south rim December Artist-in-residence. Feliciano has a BA from Smith College in film and American studies, and just received her MFA from San Francisco State University in cinema production. Her filmmaking is a form of activism, and focuses on the Western genre and its complex history in American Cinema. Her work often tells the untold stories of communities who are not in the mainstream, placing them into an old west context, allowing her characters to fully explore both that genre and their own place as outsiders in American mythology. Her most recent cinematic projects include a piece titled Land - a feature narrative that takes place in the western landscape of a post-apocalyptic future; and El Grito De Lares - an animation that tells the story of the Puerto Rican revolution after which she is named.

In late December, Feliciano plans to take a five-day inner-canyon hike, spending Christmas at Phantom Ranch while working on her projects. Before her trip, Feliciano is conducting a five-day workshop with the entire Grand Canyon Middle School population (52 students) on small-group collaborative animation projects, using time lapse and stop motion techniques. The 10-20 second finished pieces will eventually be posted on YouTube.

Feliciano said throughout her life she has been inspired by the complex natural landscapes of the world around her.

"The Grand Canyon is the epitome of that inspiration," she said. "A landscape as vast, complex and diverse as the Grand Canyon speaks volumes to me both emotionally and creatively. "

Feliciano said she currently finds it hard to identify with one medium.

"I am a writer, a photographer, an animator and a filmmaker," she said. "I make books, collages, press flowers and paint. There is no doubt that the Grand Canyon will move me to create in a multitude of ways. I am excited to use my time at the Grand Canyon to dive into the completion of my screenplay LAND, under the influence of the most influential of western landscapes. I am fascinated with the fierce drive of the frontier myth and the western hero in framing American identity. My screenplay focuses on this perspective through non-traditional western characters; my commitment to social justice and my passion for the western genre will make for a truly unique film. This time will allow me to keep to my timeline goal of being in full film production in the summer of 2015."

In studio, Feliciano has been polishing her feature-length screenplay, drawing, painting and working on mixed media collages. She's also writing a blog and posting short animations, photos and art while in-residence: at www.laresfeliciano.wordpress.com.