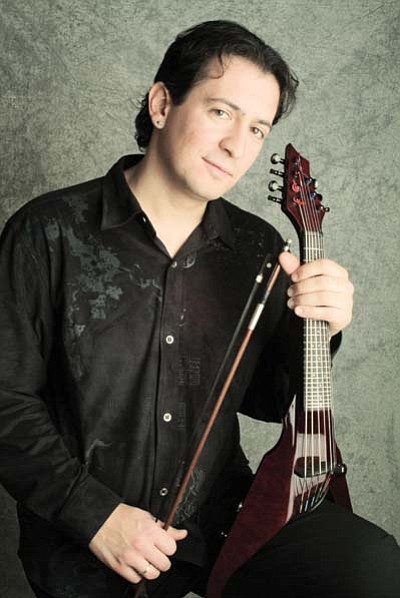 Courtesy photo<br> Joe Deninzon takes the stage Thursday at the Shrine of Ages at 7 p.m.

Those in attendance won't see large stacks of amplifiers when jazz violinist Joe Deninzon takes the stage with guitarist Steve Benson and Robert Bonfiglio on harmonica. The three plan to feature selections from Deninzon's Exuberence recording. The record features inventive swing treatments of well-known pop and rock and roll tunes. The concert will also include re-workings of classical pieces, some blues staples and original compositions.

According to Deninzon, rearranging and reworking three-minute rock and roll songs to fit a jazz based, improvisational format is a tricky business.

"You want to keep the integrity of the song," Deninzon said. "In the words of Spinal Tap, if you ever saw that movie, 'there is a fine line between clever and stupid.' You want it to be hip. You want it to shed new light on a song that people might have heard already before. That's always a challenging thing to do."

This year marks Deninzon's 12th appearance at the Canyon Fest.

"It's one of the most beautiful places on earth," Deninzon said. "I get to play with some of the greatest musicians. I've made a lot of good friends there over the years. It's a great inspiration."

Born in St. Petersburg, Russia, Deninzon has been hailed by critics as "the Jimi Hendrix of the violin" due to his innovative style on the electric seven-string violin and his compositions combining jazz and rock with Gypsy influences. Deninson has worked with Sheryl Crow, Bruce Springsteen, Phoebe Snow, Everclear, Ritchie Blackmore of Deep Purple, Smokey Robinson, Robert Bonfiglio, and Les Paul among others.

Deninzon began his violin studies in the classical realm but said he was always drawn to jazz and rock and roll music. He said bringing the violin into musical worlds traditionally unassociated with his instrument provided him a unique perspective.

"I just took to it," he said. "It was a great way to communicate with people and I just became very passionate about improvised, creative music. I knew that's what I wanted to do but I wasn't sure what instrument to do it on. There weren't that many people doing it when I was growing up on the violin."

Deninzon, Benson and Bonfiglio have spent this week working with Grand Canyon School music students as part of the festival's School of Rock program. The students will perform a free community pre-concert recital Thursday at the Shrine of Ages at 5 p.m. preceding the trio's performance at 7 p.m.