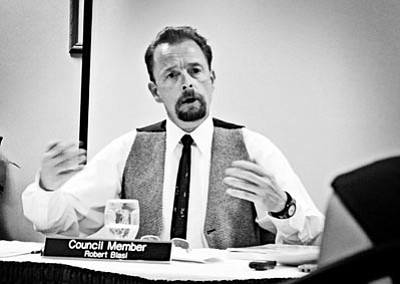 To the Community and the Voters of Tusayan, Ariz.:

It is my wish to offer to all those people who supported me in the Office of Town Council, to all the voters of Tusayan, and to any and all others that may find this of interest, an explanation of my decision to resign from public service to the community of Tusayan, Ariz.

I believe in American principles, the same principles that those who authored the Declaration of Independence, The Bill of Rights, and the Constitution of the United States possessed when they envisioned a country that guaranteed independence, freedom, life, liberty and justice for all its inhabitants. I'll go further and say that I hold these values to be self evident and unalienable, as did they.

But far too often in this country of ours we witness the destructive behavior of controlling authorities and officials that become repugnant and dastardly as a result of the ever-intoxicating consumption of power. And why should Tusayan be any different? It's not.

Anyone who has ever been involved in politics will be the last to admit, and the first to deny that those who represent the wealthy control the very society in which they are sworn to serve, but it is the electorate that will unequivocally state time and time again, that money is evil and power corrupts. From the highest offices in Washington to the humble modular Town Hall building in Tusayan, the rules are the absolutely the same. Powerful people are driven by forces so great that the modest working class people never even grasp the enormity of the force they become governed by. And even more ludicrous yet, because they "vote", somehow they are duped into believing they actually have a voice in their own future. Never has the democratic process failed so many than it has right here in the good old US of A, and with this fool proof practice that has been proven over centuries, this doctrine will continue to be imposed upon the people like gospel.

When I signed my Oath of Office back in November of 2010, I swore to uphold and defend that sacred document mentioned above, to represent my constituents, and to amplify the will of the people of Tusayan. No one else! My impression of the resident's wishes was to shrink the bureaucracy, simplify the process, phase out the County stranglehold and become autonomous and independent. What I have experienced is an increase in bureaucracy, additional complexity in process, vicious unwarranted personal attacks on my character, and an all out battle for power by several affluent and dominant factions that seem only interested in securing their own visions for the future.

Not that it should be a surprise to anyone, but the amount of lobbying and discussion going on behind the scenes is more than twice that of what actually happens in open meeting forum. The business of building a town and government from the foundation up has taken a back seat to the battle of the rich and powerful who will not allow any progress until territory, domain, and control are claimed and conquered.

We the people of Tusayan are in a less than desirable position to provide for any vital services or basic community needs ourselves. It is unfortunate that we are completely dependent at least for now upon these wealthy entities to help us begin this long and arduous process.

But we will wait.... until they are finished with their modus operandi first and there will be no guarantee who will be the victor when the smoke settles.

One thing is certain though, the wealthy will prevail and the worker bees will make honey as they always have. The lives of Tusayan's residents will be in the hands of silent partners, and not your elected officials. This is the "Hot Gate" of the southwest. The funnel into one of the few world class destination points on the entire planet that millions of visitors from all over the globe will continue to come to in droves for all eternity. And if you believe the powers that be are going to allow simpletons like a Fireman, or a Butcher, Baker, and Candlestick Maker to decide its fate, think again! The commercial potential here is as great as or greater than anything David Rockefeller and his cohorts has ever known. It has been quoted by one distinguished observer already when referring to the current council and its members, he said... "They have given the asylum to the inmates"

For a brief period of time, I actually believed that the voice of common people could be heard, but the reality of what drives politics in this world today are just too sobering to continue to so naively accept that philosophy any longer.

My conscience has guided me throughout my life, and it will continue to be a determining factor balanced with my hearts calling and direction to motivate me to step up and make a difference wherever my journeys take me.

Because the basic freedoms that I cherish are far less certain and appear now to be diminishing rapidly, it is with a clear conviction today that I relieve myself from the chains of tyranny, the manacles of corruption, and the unrelenting coercion of influence to abandon my personal values of truth, integrity and honor, which are so widely discouraged in the political arena today. It's called a Code of Conduct, and unless you possess one, my conveyance may escape you. Political survival will never be a priority. It really was an easy decision.

I have not yet begun to fight.