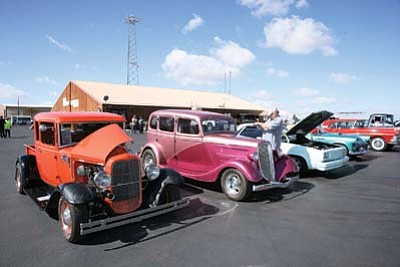 VALLE, Ariz. - Aviation enthusiasts won't want to miss the Seventh Annual Thunder Over the Coconino fly-in and celebration of historic aircraft and automobiles.

Called "one of northern Arizona's premier aviation events," this year's event will be held at the Valle Airport Aug. 27 from 8 a.m. to 3 p.m. Tickets are $12 for adults and $6 for children with a $30 maximum family entry fee. Officials with the Valle Airport, the local EAA Chapter 856, and the Valle Planes of Fame Museum organized the event. Vendors, food and more will be offered during the event.

Norm Gobeil, organizer for the event and Valle Airport manager, said the event is now entering its seventh year. This year's featured speaker, Erik Lindbergh, grandson of famed aviator Charles Lindburgh, will present a talk around 10:30 a.m. in the airport hanger.

"He's starting a business with electric airplanes," Gobeil said. "I think his presentation will be oriented towards that. Obviously, there will be people asking questions as well."

Lindbergh, an entrepreneur, artist, space tourism promoter, and professional speaker, is a passionate advocate for the future of flight and education and has been involved in the LEAP Education Program, Lindbergh Electric Aircraft Prize, and the X-Prize Foundation among other pursuits.

Rides aboard the historic P-51 Mustang aircraft will also be available during the event along with rides aboard the Flagship Detroit DC-3 a bell helicopter and the Ford Tri-Motor N414H. Fees for flights are separate from the event entry fee and range in price from $50 on up to $750. Besides aircraft, other treats will also be on hand for those who attend the Thunder Over the Coconino event.

Gobeil said the rides are hard to pass up for any aviation enthusiast.

For those looking for a more tactile, wind through the hair experience, a ride aboard a classic Stearman helicopter might be just the ticket.

"You sit in the front seat with the skullcap and goggles. It's open," Gobeil said. "Oil comes off the engine and it hits you in the face. Remember Rocky and Bullwinkle the movie? That was a Stearman that flew in that movie."

The local EAA Chapter 856 will be offering free rides for children as part of the Young Eagle introduction to aviation program (parent or guardian permission required). Other aircraft will arrive during the event and perform throughout the day and be on static display. The Planes of Fame museum collection will also be available for viewing with admission.

Gobeil said the event is a great introduction to aviation and fun for young and old alike.

"There will be a car show all day, old tractors. We've even added pony rides this year. We try to make it a family event," Gobeil said. "Our goal is to get people to come to the airport who don't know about aviation.

Also on display this year is the Copper Chopper. This special bike, built completely out of copper by Paul Yaffe, will be awarded to one lucky drawing winner the week of Feb. 14 at the Best Fest of Phoenix. The Arizona Centennial Copper Chopper motorcycle serves as an ambassador of the state's Centennial. The Copper Chopper is traveling the state for 17 months from October 2010 through February promoting Arizona's 100th anniversary of statehood.

Included in the event admission fee is free entry to the famous Planes of Fame Air Museum, located at Valle Airport. The museum houses a fascinating collection of some antiques, warbirds and homebuilts, including "Bataan", the Lockheed C-121A Constellation that once served as General Douglas MacArthur's personal transport plane.

This superb northern Arizona aviation event will feature among other unique airplanes, the 1929 Ford Tri-Motor N414H, which is housed at Valle Airport.