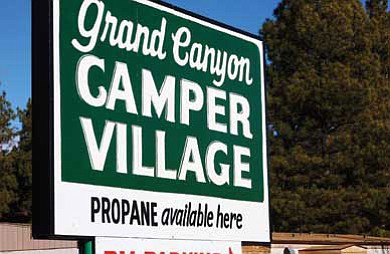 Camper Village is one of three parcels proposed to be developed by Stilo.

TUSAYAN, Ariz. - For years, Stilo Development Group has pursued a variety of development options in and around Tusayan and earlier this week handed an initial development agreement and proposal for development of three properties in Tusayan to town officials.

On July 21, Troy Corder and Andy Jacobs from Policy Development Group (PDG) and Tom De Paolo, the US-based representative for Stilo Group, sat down with The Williams-Grand Canyon News to discuss their vision for Tusayan's future.

Taking a retrospective look at the past 20 years of attempted development, De Paolo said Tusayan was - and still is - of interest to developers due to its proximity to the Canyon, Grand Canyon Railway and Grand Canyon Airport. The vision in the 90's, he said, was to create links with Tusayan to other northern Arizona tourist attractions, allowing more opportunities for visitors.

"Our feeling is that still should be the case. We are trying to make northern Arizona more of a destination than a pass through," he said. "At the time, to a certain extent there was some parochialism, 'that's my pot, and that's your pot.' (Development) will inevitably happen over time and it could be accelerated if people shared that goal."

De Paolo said housing is a critical factor included in the Stilo/Tusayan development agreement but that commercial development is necessary as well.

"People don't understand that some of this is just business," he said. "We had talked months ago about a separate fire unit out at Ten-X, and obviously they aren't going to pay for it. You pay for it by getting reduced fire rates for your insurance for all those businesses. If you can reduce response time and that's 2.9 miles, if you save five percent on your insurance, you paid for that building overnight."

De Paolo went on to say Stilo's $50,000 contribution to Grand Canyon School back in 2008 was an investment in the people who are going to work in future businesses, waiting to be built by the Stilo Group.

"If you have people who like their job, who are permanent area residents who care, who understand guest services and hospitality you are going to get a return on that through just having a better business."

Located within the town's municipal boundaries at the southeast corner of Coyote Lane and Highway 64 is Camper Village. Stilo plans to transform it's 19.3 acres into, what De Paolo called, the "heart and soul" of Tusayan.

According to the narrative report for the parcel, the developers would accomplish this by providing a "high-quality mixed-use development consisting of hospitality, retail, restaurant, residential, entertainment attraction, educational public and community park/open space uses that will foster the development of a vibrant downtown district for Tusayan."

De Paolo said currently there is no place in Tusayan where guests interact, something Stilo hopes to change.

"No matter where you go, in most countries other than here there is a piazza, there is a place where people actually look at each other, they talk to each other," he said. "We just have parking lots."

At Camper Village, Stilo wants to offer an "aesthetically-pleasing" development, accenting the surrounding environment. They also plan to develop while protecting existing natural resources. According to the proposal this would be accomplished by "encouraging the use of responsible technology to manage water, waste, and sold waste and by encouraging the use of active and passive solar power."

Also, up to 100 apartments, condominiums, and live-work units could eventually be built on Camper Village property.

The narrative states until an equal amount of housing becomes obtainable at either Ten-X or Kotzin, up to 15 mobile, modular and park model homes will be allowed at Camper Village, predicting temporary housing will remain at the site for two to three years.

De Paolo said Stilo officials are certain people would be challenging their submittal and, once the public process has runs its course, they would immediately be required to place up to 40 housing units on Camper Village.

"People who would want to own a house sooner rather than later could buy either a modular or a park model," he said. "It would be on leased land because you can't subdivide Camper Village."

Development of this 160-acre area would be mostly mixed-use development. Stilo has tagged this parcel with a "destination" identity, and hope to turn Kotzin Ranch into the "cultural campus" of Tusayan. Situated around the campus would be a variety of overnight accommodations with a range in pricing. Kotzin Ranch would also house additional lodging, dining and retail opportunities for park visitors and Tusayan residents.

The narrative submittal for Kotzin Ranch reports this proposal would help promote "a healthy tourist economy in Tusayan by providing high-level support service to accommodate both National Park and National Forest visitors."

The services would include lodging, shops, and restaurants, which Stilo said would offer employment opportunities for Tusayan residents and, at the same time, boost the town's tax revenues.

In addition to the town's own 40-acre housing plan, Stilo intends to develop its own residential housing at Kotzin Ranch. Their housing would provide options in proximity to Kotzin Ranch's commercial, retail and employment uses.

"We have pretty much one level of product in Arizona," De Paolo said. "That's fine, but there are markets for different kinds of products, whether it be for a B&B or a four-star boutique hotel, conference centers, spas, convention centers. Right now, the only availability for that is in Flagstaff."

Stilo wants the first educational campus to be fashioned after Polynesian Cultural Center in Hawaii. The campus is envisioned as a "Colorado Plateau Living Museum" which would house replicated villages, artisans, and performers demonstrating various arts, crafts and dance from tribes throughout the Plateau. According to Stilo's proposal, each village would be a genuine recreation of indigenous traditions of the Tribes of the Plateau.

De Paolo summed up plans for Kotzin Ranch by saying this parcel would enable the visitor to experience improved educational enrichment while staying at the Grand Canyon.

"People will stay longer," he said. "There are places to stay, and there are different kinds of galleries and shops and some housing that's geared more toward the seasonal worker, because it's within walking distance of where they are working."

Specifically, the zoning amendment request is to rezone the site from general to a planned community-zoning district (PCD). According to the Ten-X proposal, the PCD allows multiple land uses through a coordinated and comprehensive planning effort, offering flexibility for creating unique and high quality developments.

If the proposal goes through, Ten-X Ranch is to become a mixed-use, primarily residential, community. Stilo plans to have a variety of housing options, coupled with neighborhood commercial amenities and an RV park anchored by a spa/conference facility and dude ranch resort.

Ten-X Ranch will, according to the proposal, firmly establish the Tusayan as the major orientation and staging center for Grand Canyon visitors and Kaibab National Forest users.

'Probably 80 percent directed towards permanent area residence," De Paolo said. "The park loses a lot of people because they can't own a house."

Stilo has reserved 40 acres at Kotzin Ranch or 40 acres at Ten X as part of their pledge to dedicate a total of 40 acres to the town for public housing and public facilities. It is the town council's decision whether they choose to accept at Kotzin, Ten-X or both, splitting the acreage into 20 acres for each.

According to Tusayan Mayor Greg Bryan, the town of Tusayan will host two or three public meetings in August, not making any decisions regarding the proposal until they've not only had public comment, but also Planning and Zoning consideration.