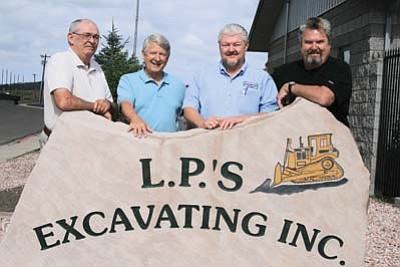 Submitted photo<br> Rotarians Steve Hudgens (left), Jim Bultema and Kevin Young (right) take time out to thank Larry Pittenger (center) for his donation of a load of cinders to the Western Auction.

The auction will be held at Miss Kitty's Steakhouse Aug. 20, from 5-9 p.m. Ticket prices are $35 each and available from any member of the Williams Rotary Club. Rotarian Jim Bultema is the chair of this year's event, which will be catered by a number of area businesses.

"In the last three years we've raised $40,000," said Bultema. "All that money goes to the youth of the community for the scholarships."

Some funds will also benefit local driver's education class, offered to the youth in the Williams community. People can purchase corporate tables at the event.

"Corporate tables for eight individuals cost $275 and, as of right now, we only have five left," said Bultema. "Those people who purchase a corporate table will get a special table with their recognition, and a special placard with their name on it."

According to Bultema, the Western Auction Committee is currently meeting every week in order to gear up for the highly anticipated event.

"The committee is getting a lot of things done," said Bultema. "The committee really enjoys the event and has been working hard to make this year a success."

The event will once again feature the quarter auction, which is a raffle style auction where people interested in an item can put their quarters in a bucket and get a number, later numbers will be called to see who won.

"The quarters is the fun part," said Bultema, "Because it's loud and people get really excited."

This year will be the second year the event has used a corporate sponsor. This year's sponsor, North Country HealthCare, donated $1,000 to help fund the event.

Auction officials are still seeking donations for this year's event. Donations for the Western Auction can be dropped off at Superior Propane. For more information on donations or on the auction itself, contact Bultema at (928) 607-1210.

"We ask that everybody go through their homes and try and find things you can donate to our auction," said Bultema. "It will benefit the community."

Williams Rotarian Patricia Helgeson said work is also progressing on a raffle for the Western Auction. Tickets have been distributed to Rotarians with information on how to sell them to anyone interested in attending the auction.

"The goal, by the end of all of this, if everybody sells their 100 tickets, we should have almost $4,000 in collected revenue," Helgeson told Rotarians.

"Last year we got a lot of help from the community so if we can get that again we would be really happy." said Bultema.