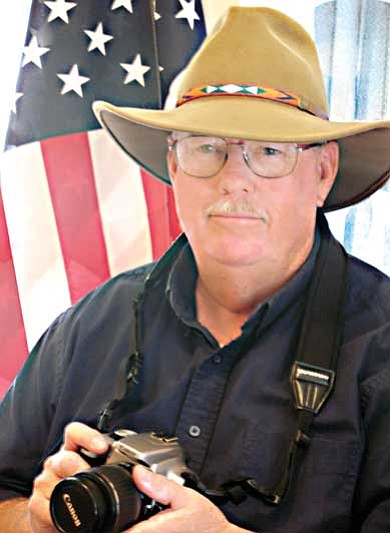 WILLIAMS - The American Trains photo artwork featured at The Singing Pig BBQ Restaurant in Williams is the work of local resident and Americana Historical Photographer Robert Robinson. Why trains?

"It's the transportation that grew America. Because of trains the west became populated, goods were transported and immigrants were able to develop outlying areas of our country," said Robinson.

Robinson grew up knowing at an early age that trains were going to be his passion. He remembers trains around the Christmas tree and because he grew up near the railroad, by the age of 6 he was up front riding with the engineers in Orange County, Calif. No matter what career he worked, he says, "I always stayed close to the trains."

Now once or twice a year he and his friend Roger Lee do something called Recreational Railroading throughout the U.S., Mexico and Canada. In July Recreational Railroading enthusiasts will be heading north to Saskatchewan for three weeks where Lee will be one of 25-43 operators of Track Inspection Cars. Starting in Prince Albert at the Canadian National Railroad Line they will caravan for three weeks throughout Saskatchewan. All operators are private owners of these retired cars and when asked where they sleep, Robinson answered with his quiet good-natured laugh, "We either park our Track Inspection Cars on the railroad for the night or drive them off the tracks and park them in our hotel parking lot."

From a Brownie camera in the 1950s to a Canon Rebel XT today, "Train Bob" has captured the history of the American railroad and recalls all the loving details of every train he's ever photographed. The artwork is displayed and may be purchased at The Singing Pig BBQ Restaurant through August. The Singing Pig is located at 437 W. Route 66.