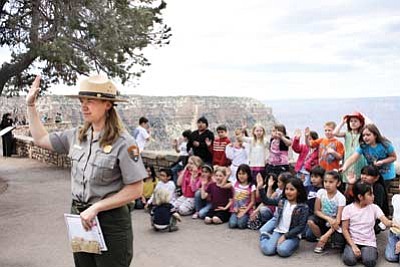 GRAND CANYON, Ariz. - As Jenn Marshall lined up her second graders for a photo on the Rim, she patiently juggled visitor's questions, all because she was wearing a very distinctive hat and uniform.

"I really don't mind when I get questions from the public," Marshall said. "I just love being outside and I love making contact with the visitors. I try to help visitors go beyond the normal 'stand and the rim, look and walk away visit.'"

"This may be the first time there has been a Teacher-Ranger-Teacher that lives in the Grand Canyon, they are usually from other states," she said.

According to the NPS website, the program is made possible through an Inter-governmental Personnel Act Agreement (IPA) with public school districts and NPS.

The TRT program requires selected teachers to spend the summer working as park rangers, learning and working on interpretive programs for the public depending on their interests, with the understanding they will relay what they learned during the summer months back into the classroom.

For Marshall, this translated into a love of the California condor.

So interested, the kids made their class mascot Igor the condor, which doubles as a classroom tool. The students cannot talk during class unless they are holding Igor the condor.

"They have learned that Igor was the last wild condor caught in 1987, and so they named it that. It is so cute," Marshall said.

Marshall organized trips to the Grand Canyon Meteorological Station during their weather unit, as well as visits to the museum collections and Kolb Studio, utilizing and fusing the abundance of available park resources to enhance her student's learning. Environmental Education Rangers speak to the students during class time, and the Grand Canyon Association donated many of Marshall's books.

"Every unit had connections to the Grand Canyon, we are just really lucky to be here at the Canyon for this," she said. "As an example, yesterday I took them out to one of the fossil sites, because we are reading a few books about fossils, they identified a few fossils."

During National Park Week, held last week, Marshall wore her NPS uniform in her classroom and focused primarily on engaging her students with activities related to the Grand Canyon.

Receiving junior ranger badges on the rim of the Canyon was the culmination of the week's activities, Marshall said, stressing the importance of why she decided to become a TRT. When she was a ranger last summer, changing the way students look at the canyon was a top priority she said.

"It really was shocking to me, when I first started working here how many kids live right around the Canyon, come to school at the Canyon, and for some of them, the only time they ever go to the rim is when we walk on field trips. So, it is sad to me that they live in the middle of this awesome place that they don't get to see," Marshall said.

For visitors and students alike, gaining an appreciation of the Grand Canyon is Marshall's goal. Her satisfaction is evident through stories of her student's experiences.

"One day we went hiking through the woods and they were starting their Junior Ranger books and one of the kids went, 'shh.' We turned around, and we were walking right through a bunch of deer that had already bedded down in the woods. It was so magical," she said.