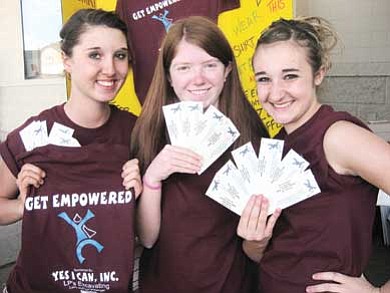 Submitted photo<br> From left Crystal Heiser, Miranda Mann and Bayleigh Preston hold tickets to Sunday’s Yes I Can event. “Get Empowered” shirts will be for sale along South Fourth Street beginning Sunday at noon.

WILLIAMS - Yes I Can, promises to play host to many exciting and inspirational entertainers this year.

Non-profit organization Yes I Can, sponsored by individuals and groups in Williams, strives to improve young people's attitudes and minds through positive role models. According to their website www.yesicaninc.org, this is accomplished by "teaching fundamental principles of the powers of faith (belief), self-confidence, and self-worth in a powerful, inspirational, and motivational format."

"Get Empowered" will be a motivational type seminar, focusing on delivering thought-provoking messages through public speakers. Larry and Lori Pittenger of L.P.'s Excavating are the main sponsors of the event.

Organizers hope to have around 500 people attending this event, hosted at

Yes I Can President Bill Sutton said that would be 100 more than the last two major events they have organized since 2007.

"What we achieve is not very measurable, but we do evaluations and from them we know that our events do make a difference in young people's lives," he said. "Sometimes they do something or see something that that they have never seen before, which can make a lifetime of difference."

This event will have returning speakers as well as some new faces.

Ex-Buffalo Bills quarterback Frank Reich is not coming until next year's event by mutual agreement. He has been replaced by Jared Hernandez.

Hernandez has been a host on a number of Disney Channel shows, and co-host with Selena Gomez at the Walt Disney World Christmas Parade.

Actors Randy Wayne and Sean Afable from the Christian drama To Save A Life will be present to sign autographs and to speak on high school life.

Wayne has been in a number of productions, including "Luke Duke" in Dukes of Hazzard the Beginning, The Closer, as well as the starring role of Jake in To Save a Life.

Sean Afable has been in Scorpion King, Akeelah and the Bee, and others, including the role of Jonny in "To Save a Life"

Julie Hadden, author and runner-up on reality show "The Biggest Loser" will speak about her life challenges and her book Fat Chance. Hadden has been featured on Oprah, Larry King Live, and a number of other shows.

Comedian Carlos Oscar will also be returning with more of his good clean humor about life and family. Bill Cosby has called Oscar "A comedy treasure".

Oscar said he is humbled to be invited back to Williams for the April 10 event.

"Even though I'm only a small part of it with the rest of the speakers, we all hope to entertain and impact a positive message to the kids who are our future leaders," he said.

Past attendees of Yes I Can events have had similar memorable experiences as the speakers.

High school sophomore C.H. said, "It rocked, and I never thought hearing stories of others lives and how they overcame adversity could help me so much. The energy in the audience was so obvious to everyone who participated. I loved what Tina Marie said about how the media affects what girls see in themselves. Her videos were amazing," she said.

High school sophomore C.L. felt the Yes I Can Event was made just for him, and middle school student C.S echoed the sentiment.

"Yes I Can and the events they sponsor will lead you to the right places and right frame of mind to keep your life in the right direction," she said,

Tickets include the event and chance at prizes including a Kinec, an IPOD, a Blue Ray DVD Player, and many others.

Tickets also include snacks at the event, and the post event barbeque at the Rec Center. There, an autograph session after the event. Barbeque starts 6:15 p.m. and requires a ticket.

Qualify for extra prizes if you wear a "Get Empowered" shirt to the event. Shirts are for sale the day of the event on 4th Street near the dam. Also, you can contact Bill Sutton or a Yes I Can member. Shirts are $12.