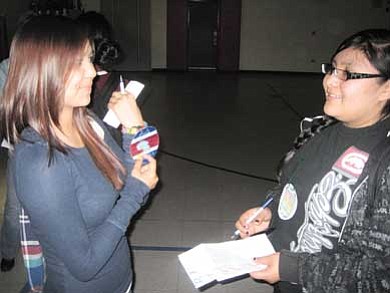 Last week, Mrs. Tobin's Spanish classes took on a project with international significance. Each of her current students, as well as all students and staff, were encouraged to research an international issue, create a button about the issue and wear that button all week. The purpose of button week is to heighten the awareness of everyone on campus of global issues that affect the entire human race.

The goal is to involve all students, faculty, and staff in becoming aware of the myriad of struggles, questions, problems and suffering that is a real part of people's lives every day and what we as individuals can do to help.

The idea for the project came from an IB project manual for Language B. The project culminated with a middle school-high school assembly last Thursday afternoon. Students and staff were engaged in a variety of discussions from the horrible abuse of women in Juarez to polluted water supplies in Venezuela. It was a project that truly captured the essence of having "international mindedness" - an IB trait that is a part of the Grand Canyon curriculum. Thank you to Terry Tobin for coordinating this most meaningful experience.

What has been going on in eighth grade language arts? Last month the students finished an eight-week unit on Anne Frank - the focus being on how she used writing to communicate about herself. To support the curriculum, Mr. Cain's eighth grade class did an in-depth study of World War II with a focus on writing an essay about moral courage.

To culminate this activity, song-writer and educator Bernice Lewis visited GCS to tell her story about how her father escaped being captured by the Nazis in the streets of France during the war. Her family is Jewish.This is her fourth appearance at our school, and this year's eighth grade class was extremely engaged and respectful to Ms. Lewis. After her presentation, she showed photos of her family and documentation that her grandmother needed in order to get to America. Lewis ended her program with two songs - both about being survivors of something that, even though a horrible part of our history, reflects the positive aspects of hope - something that we all need to hang on to.