Vikes steamroll Grey Hills
Undefeated after five games, the Vikings head into the second half of the season firing on all pistons 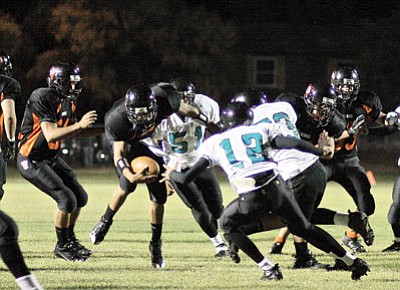 Ryan Williams/WGCN<br> Darius Brown runs the ball up the middle during the Vikings commanding 49-0 win against Grey Hills Sept. 24.

WILLIAMS - The Vikes are on a roll. With a 49-0 victory over Grey Hills Friday, they head into the second half of the season with a 5-0 record.

Head Coach Jeff Brownlee said his players have adapted to offensive changes and are continuing to improve.

"We took it to them," Brownlee said. "We're still rolling. We're half way through the season at 5-0. Couldn't be any happier. Our team attitude, team speed and team desire is so much higher this year. The kids have bought into the system and they're playing well."

Jamal Drake opened the first quarter catching a 36-yard pass from Darius Brown to put six points on the board. After a two-point conversion pass from Doug Forbis to Elias Sammorano, the Vikes took the lead 8-0.

The Vikings exploded in the second quarter scoring 33 points. Darius Brown ran the ball for 15 yards for the first touchdown of the quarter. Kohl Nixon pulled down a pass from Doug Forbis for the two-point conversion. After a short Grey Hills possession, Alex Soria ran the ball for 20 yards into the end zone. After a failed point after touchdown, the Vikes held a commanding 30-0 lead.

"Obviously, offensively we're doing better," Brownlee said. "Things are starting to click. I still would like to see the total offense yardage higher though."

The Vikings continued to score on the ground throughout the game with a 16-yard touchdown run from Darius Brown and a five-yard touchdown run from Dallas Grantham. With two failed point after attempts the Vikes extended their lead to 42-0. A final 20-yard run by Brown and successful point after, also by Brown, brought the score to 49-0 to end the game.

The Vikes JV team played the majority of the second half on offense. Brownlee said his varsity squad never had a chance to re-enter the game.

"We kicked off to Grey Hills and, believe it or not, they had that ball the whole third quarter, "Brownlee said. "It was a running clock. Even on time outs the clock ran. That was because the Grey Hills coach and the referees decided to keep it going. We were going to put our starters back in for a series so they can come out with intensity in the second half but we never got that chance."

Brownlee went on to say special teams are doing well but that point after conversions are low.

"Christian Prieto is kicking the ball deep into the end zone where they don't even have a chance to return it most of the time," he said. "Obviously, in our point after touchdowns, we go for two a lot, but there are going to be times when we need to get that one point and that is something we are definitely going to work on this week, our kicking game."

The Vikings travel to Valley-Sanders Friday and return home taking on Red Mesa for Homecoming Oct. 8.