Phantoms get in the games
Wins, losses for the week 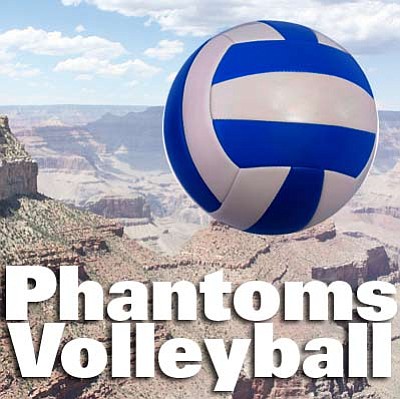 GRAND CANYON, Ariz. - GC High School teams were on the road this past weekend.

The Phantom Volleyball team traveled to St. Johns on Sept. 23, where the JV (junior varsity) and varsity squads both lost in three sets. On Sept. 24-25, the Lady Phantoms participated in the Joseph City tournament. During the tournament, the Phantoms beat: Fredonia, Hopi, Many Farms, Williams, and Valley. The Phantoms played in the Consolation match on the afternoon of Sept. 25, after losing a tight match 25-20, 25-20 to host school Joseph City.

"When we're in our zone, we are unbeatable," said team captain Kelsey Wren, "and when we're not, we have a hard time getting up. This was a good tournament for us."

The Phantom volleyball team opens conference play Friday when they travel to Fredonia for a 4 p.m. match before heading to Beaver Dam Saturday for a noon match-up.

The Phantom Soccer team played a double-header Sept. 24 as the team traveled to Snowflake and Holbrook. In the 11 a.m. match, the Phantoms fell to a talented and aggressive Lobo team 11-0. The Phantoms played a strong first half and then, in the second half, opened with a few unlucky bounces that benefitted the Lobos.

Coach Cain stated, "We need to be more aggressive with our attack so we know what it feels like to put a few in the back of the net."

Senior Larin Tallis summed up the match with these words, "This was our best game this season. We never gave up like we have in other games. We had much more presence in our attack this afternoon."

The Middle School soccer team will resume play after a bye weekend with matches Saturday at NPA. The Grand Canyon MS Phantom team will compete at 10 a.m. and 1 p.m.