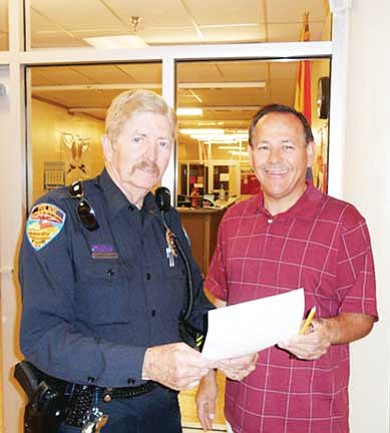 WILLIAMS - Many national commentators these days decry the fact that young people have not read the U.S. Constitution. Now, at Williams Elementary-Middle School (WEMS), student will not only read and discuss the Constitution, but they will have a financial incentive to memorize the lines of the famous document.

Retiring School Resource Officer Bob McCarty has offered a $100 prize to the first eighth grade student who memorizes the seven articles of the Constitution and can recite it to a committee of teachers. Eighth grade students are enrolled in civics as part of the regular curriculum at WEMS.

"The U.S. Constitution is the starting point for all of our laws and should be understood by all students," said McCarty.

McCarty went on to say that he would like to see other individuals and service organizations "sweeten the pie" by making more money available to the students who step up to this challenge.

The school will call this prize the Officer Bob McCarty Constitution Award. This prize is part of the school's ongoing effort to raise the standards in the school to reach the goal of becoming a Performing-Plus School in the near future. This award focuses on those students who are exceeding the standards as talented and gifted students. These gifted children will have opportunity to demonstrate their abilities and receive a monetary reward for their talents.

If no student receives the prize money this school year, McCarty has offered to add another $50 for next year's eighth grade class.

McCarty will be retiring from his current post in May. He felt that this award is a fine way to call attention to respect for and to increase knowledge of the law - especially the U.S. Constitution, the highest law of the country.