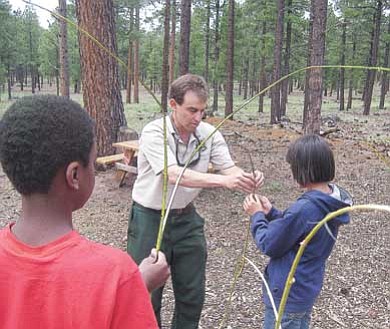 WILLIAMS - A Kaibab National Forest employee was awarded the President's Volunteer Service Award for his ongoing commitment to community service.

Archaeologist Neil Weintraub, who has worked on the Kaibab National Forest since 1990, has been a longtime volunteer in northern Arizona communities including serving with Big Brothers Big Sisters of Flagstaff both on their activity board and as a mentor in their Flagstaff and Williams school-based programs.

The award, which was officially announced in August as part of the United States Department of Agriculture Secretary's Annual Honor Awards ceremony, serves as a way to thank and honor Americans who, by their demonstrated commitment and example, inspire others to engage in volunteer service.

As part of his recognition, Weintraub received a congratulatory letter from President Barack Obama. The letter reads, in part, "While government can open more opportunities for us to serve our communities, it is up to each of us to seize those opportunities. Thank you for your devotion to service and for doing all you can to shape a better tomorrow for our great Nation."

Weintraub has spent many years volunteering with Big Brothers Big Sisters, which is a non-profit organization that helps children succeed by matching them with appropriate adult mentors, contributing to brighter futures, betters schools, and stronger communities for all.

"Several friends and I decided to get involved with Big Brothers Big Sisters of Flagstaff in fall of 2001 when we heard that their activity boards were in search of new members," Weintraub said. "Attending my first board I met so many community leaders who volunteered for the organization, I was inspired to participate."

As chairperson of the annual Big Brothers Big Sisters half-marathon race and fundraiser, Weintraub contributes hundreds of hours of his time. The race has grown to a record 500 participants and raises about $30,000 for the organization.

In 2004, Weintraub recruited other Forest Service employees to participate in Big Brothers Big Sisters and was able to garner enough volunteer support to start the mentoring program in Williams schools. In 2008, Weintraub was named Big Brother of the Year in northern Arizona.

Besides his work with Big Brothers Big Sisters, Weintraub also volunteers his time as director of the Blue Cross Blue Shield of Arizona Flagstaff Summer Running Series, a series of six races held between May and August; co-founder and director of the Northern Arizona Trail Runners Association, which has more than 500 members; organizer of the fall Soulstice Mountain Trail Run, which annually raises more than $3,000 for charity; steward for the Arizona Trail Association, which makes him responsible for the maintenance of a popular hiking and biking trail; and organizer of volunteer events to help construct sections of the Arizona Trail, a hiking trail from Mexico to the Utah border.

"Volunteering with Big Brothers Big Sisters of Flagstaff and directing the Northern Arizona Trail Runners Association combine two of my favorite activities, teaching and running," Weintraub said. "On a more personal level, it certainly opened me to a world of new friends."