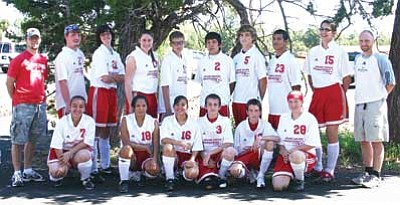 GRAND CANYON, Ariz. - The Phantoms of Grand Canyon High School started their season recently. The boys team took on Verde Valley Sept. 3, taking a 1-0 loss in the game, according to Phantoms Coach Greg Cain. He said that, despite their loss, the team played well.

"We were competitive throughout the whole match and, unfortunately, Verde scored in the final 10 seconds of the game," Cain said. "Joey Bankston, our freshman keeper, had an outstanding game. In addition, our core defense of Jose Jaime, Ethan Berry, Larrin Talas and Molly Struble were solid throughout the match. It was a great start to the season despite the final outcome."

The boys soccer team went on to play a match against NPA (Northland Preporatory Academy), where the Phantoms lost by a score of 8-1. Ethan Berry scored the single Grand Canyon goal in the game.

"Our team came out flat for the first 25 minutes of the match and NPA capitalized by building a large lead. What I was proud about was how our team responded in the second half. It would have been easy for them to have stopped playing, but they became more aggressive and competed very well in the second half. That shows character," Cain said.

The Phantoms will be on the road throughout September. They will return for a home game against Phoenix Country Day School Oct. 1.

The Lady Phantoms volleyball squad got their season underway recently with a varsity, JV (junior varsity) match against Williams. Both the JV and varsity squads took the win in the match.

The Lady Phantoms will play at home tomorrow with a game against White Cone.

Kicking with the Phantoms
Phantoms get in the games
GCS basketball action gets underway
Vikings struggle in conference play
Fall sports kick off at Grand Canyon
Contact Us
Submit Questions, Comments, or Story Ideas