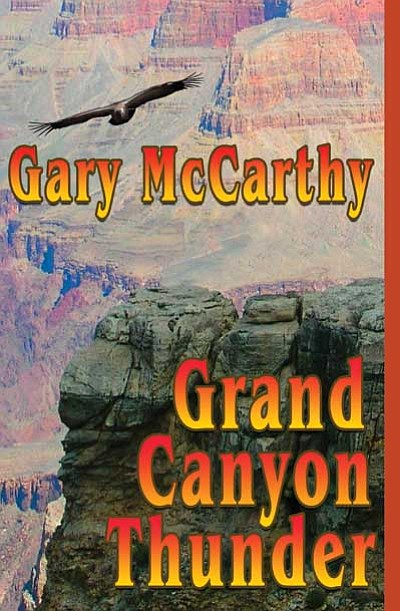 <br>Images courtesy Gary McCarthy<br> Pictured above is the cover for Grand Canyon Thunder, soon to be available through Canyon Country Books.

WILLIAMS, Ariz. - A scant 50-some miles from the South Rim of the Grand Canyon National Park is where western novelist Gary McCarthy hangs his cowboy hat. The national park, and the myriad stories therein, are never far from the famed author's mind. As the creator of four fiction books set within national parks, including Mesa Verde, Yellowstone, Yosemite, and Grand Canyon, McCarthy has explored the history of many of the nation's popular national parks in vivid detail.

McCarthy plans to re-release those books in the coming year as part of his new Canyon Country "Thunder" Books imprint. He plans to have the books available at a number of northern Arizona retailers, as well as online via Amazon.com and other Web-based booksellers. Many of McCarthy's out of print novels can still be found online.

"Because these big, historically-based novels were so popular, and so many people are asking them to become available again, I intend to rewrite, revise, create new covers for and then reprint all four as Canyon Country "Thunder" Books," McCarthy said. "I'm very excited about revisiting these exciting histories and timeless tales and will devote the next few years to researching and writing other similar historical novels."

The idea for historically accurate novels based on America's western national parks, McCarthy said, came to him in 1994. He quickly sold the concept to New York publishers.

"It was a dream contract, maybe the most exciting project I ever received," McCarthy said. "The next thing I had to do was choose which national parks in the west to do. I first chose Yosemite, because I'd grown up in California and we had vacationed there as a family for many summers. Yosemite was a novelist's delight. I created a story using Chief Tenaya of the Ahwahneeche Indians who lived in that paradise. I also threw in John Muir and Grizzly Adams and had a wonderful time researching the novel."

"I was aghast to discover that nothing much had ever happened in the Grand Canyon. Sure, there were ancient peoples, a few miners and most importantly the Havasupai, but the Canyon's size and geography prevented ranching, not much in the way of mining (thank heavens) and little else," McCarthy said. "So I started writing about the first Spaniards to see the Canyon in 1540 with the Coronado Expedition and how they sent three poor soldiers down to get water. After that, I jumped all the way in time to 1869 and the Powell Expedition. Major Powell wrote vivid and extensive accounts on the harrowing journey that were a huge help to me; when the party finally arrived at Separation Rapids, I became very interested in William Dunn, the most experienced and least-known of the three men who deserted the party at Separation Rapids never to be seen again. I thought, what if Dunn, at least, survived? Maybe I could create a really fine historical novel around that mystery man. And so I did. I had a marvelous time with William Dunn and gave him a very long and exciting life in my Grand Canyon."

Published as a mass market paperback in 1996 by Pinnacle Books of New York and both written and researched in 1995, Grand Canyon went on to achieve a large measure of success, though the book itself is now out-of-print.

"It sold very well, went out of print eventually and now I'm republishing it later this year in trade paperback under my company's name of Canyon Country Books," McCarthy said. "Grand Canyon, like the other three National Parks novels, all begins with the first white men to see the future park and ends with the location becoming a National Park. In Mesa Verde, that was another challenge. I set the beginning of the novel on a snowy December day in 1888, when Richard Wetherill and another cowboy first saw Mesa Verde. The novel then takes a huge jump back in time to the ancient ones, who many call Anasazi or the Puebloan Peoples, that lived, hunted and constructed the amazing cliff dwellings about two thousand years ago."

McCarthy has written a total of 34 western novels and 14 American historical novels during his 30-year career. An estimated three million copies of his books have been sold to date. His most recent novel, River Thunder, was recently honored with a Silver Spur Award by the Western Writers of America as the Best Audio Book of 2009. The novel was adapted by Books in Motion and read by Kevin Foley. The audio book runs 11 hours in length.