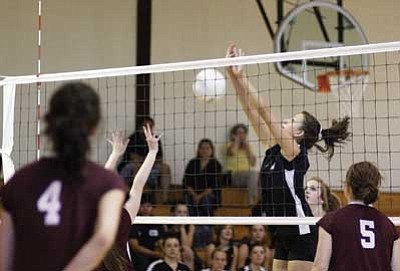 WILLIAMS - After a season opening win, the Lady Vikes volleyball team has had a bumpy road, losing their next three matches.

"Gloria Murders did outstanding in serving," she said.

Carter went on to say the JV team is improving rapidly and on the right track putting together bump, set, spike combinations.

Carter said things began to fall apart from the outset of the game.

"From the start we had a bad game," she said. "It seemed that nothing worked in our favor. We stayed up with Northland until about point 10 or point 15 but then after that we just lost it. We let them score five or six points and after that they let them have the game. It was just an off, off day."

The Lady Vikes traveled to Grand Canyon on Friday with similar results.

"Unfortunately, from the start, we did not show up for the game," Carter said. "Nothing worked out for us. It was one error after another. They killed us and we were done. I don't know where our minds were."

The Lady Vikes next traveled to Hopi on Saturday. Carter said despite losing their third straight game, her players put up a good fight.

"We actually played a really good game," she said.

Carter singled out Gigi Brown and April Zicopolous, both middle blockers, for their outstanding play.

"They really stepped up to the plate," she said. "I think each of them had four to five blocks plus probably another eight to ten touches. So, they played really well."

"We had really good serves," Carter said. "We got some really good kills. We just unfortunately couldn't pull out a win."

The Lady Vikes are 1-3 for the season heading into a difficult week on the road, facing Camp Verde, a big 2A competitor, 3A Sedona on Thursday, and 3A Wickenburg on Saturday.

Carter said she had hoped to come away from the Lady Vikes' beginning stretch of games in a better position.

"Playing these 1A teams, we have to come out and win these games," she said. "I knew this week was coming up and I wanted to go into it at least mentally positive and having some wins behind us but unfortunately we don't."