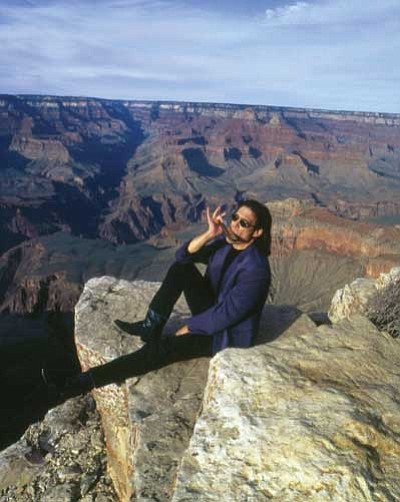 <br>Courtesy photo<br> Grand Canyon Music Festival co-organizer Robert Bonfiglio, pictured right, has been a facet of the annual music festival since its inception 27 years ago.

GRAND CANYON, Ariz. - The Grand Canyon Music Festival, under the direction of Robert Bonfiglio and Clare Hoffman, will wrap up their 2010 season this weekend with a number of performances at the South Rim of the national park. Artists James Bilagody, Robert Mirabal, and the string quartet ETHEL will be among those performing for the popular festival's final weekend. Both Bilagody and Mirabal will perform with ETHEL, well known for their innovative Truck Stop tour, on Friday and Saturday. Performances will begin at 7:30 p.m. at the Shrine of Ages. On Sunday, festival organizers will premier the Native American Composer Apprentice Project, spearheaded by the members of ETHEL, as well as musical artists Raven Chacon, Michael Begay and Trevor Reed.

Hoffman said a recent grant from the Arizona Commission on the Arts helped spread the word about the music festival this year.

"It's been really great so far, really terrific," Hoffman said. "Because we had a grant from the Arizona Commission on the Arts this year, specifically to expand our marketing efforts, we were able to get a lot of connections with the public radio stations in the region and I think it's really made a difference. We've been following the reactions to the marketing and, as soon as there was an interview or a ticket give-away, on that day there was a bump in our ticket sales. That's been really nice to see that our audience, despite the economy, is definitely much better than it was last year. It's nice to have made that connection with all the public radio stations in the region. As always, we have our volunteers that have been terrific, pulling things together and volunteering during the concerts and even in-between concerts to help get things set up. It's been a good year."

Hoffman said that, while ETHEL is considered by many as a string quartet, they are often also considered a string band.

"They are Julliard classically trained musicians. They can, and do, play Mozart and Beethoven and all those other great composers," she said. "Their mission, in their ensemble, is really to stretch the boundaries of what classical musicians do. They started a project a few years ago called Truck Stop. What they do is go around the country and meet musicians from all over, from all different genres, and collaborate with them, finding new ways of looking at music. They actually started it at the Grand Canyon Music Festival four years ago I think, when they met a wonderful Navajo artist named James Bilagody. He performed with them at the Grand Canyon that year, and he also performed with them last year. They brought him to New York to play some of the big venues there."

Since their beginnings at the Festival, ETHEL has performed with musicians hailing from all over the nation, including the acclaimed musician Robert Mirabal.

"He won two Grammy Awards," Hoffman said. "He plays Native American flute. He will be joining ETHEL at the Grand Canyon Music Festival on the 10th and 11th, as will a Hawaiian slack-key guitar player named Jeff Peterson. This is kind of a typical ETHEL Truck Stop collaboration where you bring musicians from different cultures and different styles together to improvise and make new music."

The Native American Composer Apprentice Project is also scheduled to premier on Sunday beginning at 5 p.m. The composer project will be held at the Grand Canyon Community Building, Hoffman said.

"All the students from those schools will be joining us up at the Canyon with their family members and teachers," Hoffman said. "ETHEL is very much involved in that, as the ensemble in residence. Students have been working with our composers in residence. We have three this year; Raven Chacon, who is a member of the Navajo Nation, Michael Begay, also Navajo, and Trevor Reed, who is a member of the Hopi Nation. They've been teaching students from five schools on the Navajo and Hopi Nations how to write music for string quartet."

A film on the Native American Composer Apprentice Project is also expected to air for the public during the Sunday concert, Hoffman added.

"It was made over the course of the last two or three years. A filmmaker named Molly McBride came out with us to the reservation about three years ago to document the work we are doing here. The film is now complete and she wants to do a showing at the Grand Canyon. We are figuring out the logistics of that, but it will also take place on Sunday. It will be before or after we play the students' pieces," Hoffman said. "It's really exciting."

The film and Native American Composer Apprentice Project performance will be free and open to the public, Hoffman said.

Concert prices are $15 for adults and $8 for students and children ages 6 years old and up. More information on the event can be found online at www.grandcanyonmusicfest.org.