Next stop, St. Johns
After win against Many Farms, Vikings 9-0 heading into division championship 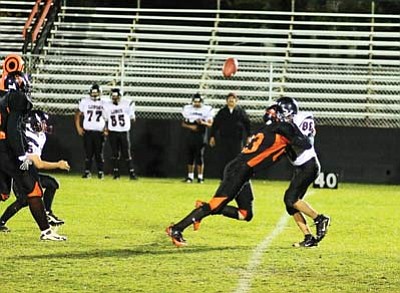 Ryan Williams/WGCN<br> The Vikings defense shakes up Many Farms’ quarterback to force a fumble during their 61-0 win. The Vikings JV team entered the game with five minutes left in the first quarter.

WILLIAMS - It's nice to be on top and that's exactly where the Williams High School Vikings sit after their 61-0 win against Many Farms. The only problem, they face their toughest challenge of the season against St. Johns Friday after a stretch of games with little or no competition.

Head Coach Jeff Brownlee said his concern is whether his players are ready to play four quarters of a physical ball game.

"These last few games have been kind of hard because our varsity kids are so geared up wanting to play and they are having to play a half a quarter or a quarter," he said. "It does not do us well. It hurts when you play these weaker teams."

Brownlee went on to say his players are feeling confident but not cocky.

"They know what they have to do Friday night," he said. "They are ready for the challenge."

Drake scored next on a 55-yard punt return with an extra point from Darius Brown. After forcing a Many Farms fumble, Dallas Grantham reached the end zone on a seven-yard run. After a failed extra point the score was 36-0.

With five minutes remaining in the first quarter, the Vikings JV team took the field.

In the second quarter Davalos again found himself in the end zone after a 25-yard run. After a failed two-point conversion attempt on the ground the score hit 55-0. Solano put the last Viking points on the board in the fourth quarter with a 63-yard run making the final score 61-0.

"The guy, he is just physically a monster with the ball," Brownlee said.

According to Brownlee, a 9-0 record heading into their match up against St. Johns has been a season long goal. Friday's game at St. Johns will decide the 2A North Division championship.

"Both teams I think are equal," Brownlee said. "We have a mature group of kids who are ready to play some football. We're going to have fun."