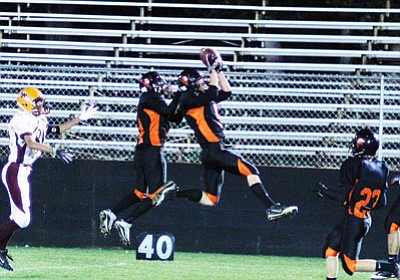 WILLIAMS - The Vikes look unstoppable. But, they've yet to face their biggest challenge of the season - one that won't come until their final game of the season against St. Johns for the division championship.

With a 83-0 win against Rough Rock Oct. 14, the Vikings just have two games left in the regular season. Head Coach Jeff Brownlee said the goal is to keep his players focused on the game at hand.

"We still have one more hurdle before the big showdown," Brownlee said. "Trying to keep our kids focused game to game is a little tough because they're thinking St. Johns and talking St. Johns but we've got to take one game at a time."

At the start of the first quarter, Dallas Grantham ran the ball one-yard into the end zone followed by a kick by Darius Brown. Next, Alex Soria ran the ball 40-yards for a touchdown followed by a two-point conversion pass from Brown to Doug Forbis making the score 15-0.

Brown connected with Colton Baxter for a 40-yard touchdown pass followed by an extra point kick from Brown. Forbis scored next with a two-yard run with a successful extra point from Brown.

Soria reached the end zone on a 19-yard run followed by a blocked extra point. Baxter then caught a 49-yard touchdown pass from Brown. After an unsuccessful point after, the score was 41-0.

And the game had not reached the second quarter.

"It was kind of a unique situation," Brownlee said. "I had initially told my varsity kids that they would play the first half and then let them sit and stay healthy and put in the JV team. But, the score got so out of hand so quick that we put the JV kids in at the start of the second quarter."

Jeff Brownlee found himself in the end zone after a one-yard run near the start of the second quarter. Adrian Solano made the point after to bring the score to 48-0. Solano then ran for 25-yards followed by a two-point conversion on the ground from Solano as well.

Coty Baxter ran 29-yards into the end zone on an interception return with a successful point after.

In the third quarter, Rashaan Drake had a 38-yard touchdown run with an extra point kick from Solano making the score 70-0.

In the fourth quarter, Baxter scored on an 11-yard run. Solano then scored on a 63-yard punt return to end the game.

"The point after, we just fell on it because we didn't want to score anymore," Brownlee said.

The Vikes had five penalties amounting to a total loss of 65 yards.

On defense, Forbis had three interceptions.

"I think the game before he had three or four," Brownlee said. "He is just doing an outstanding job of moving on the ball and catching the ball defensively."

Brownlee said the opportunity to give the JV team more time on the field helps to develop a deeper team.

"The younger kids got to play three quarters," Brownlee said. "They scored 43 points themselves."

The Vikings take on Many Farms Friday at home at 7 p.m. They travel to St. Johns Oct. 29. Like the Vikes, St. John is undefeated in the conference. The game will be for the 2A Division championship.