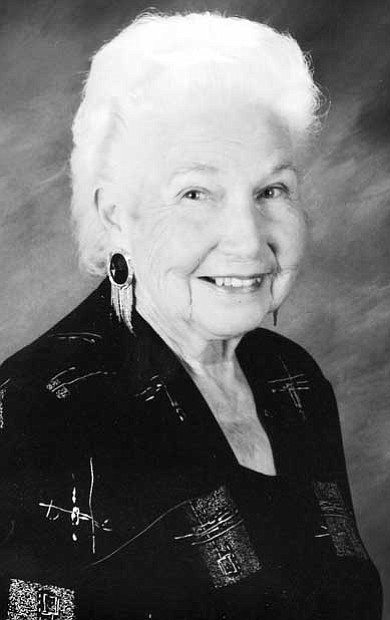 Dorothy Dean Wilson Schulte - mother, grandmother, great-grandmother and persona extraordinaire - died on Friday, Oct. 15, 2010 at the age of 88. She was a world traveler and a local friend. She nurtured her family and warmed their home with her cooking.

Her husband, John "Jack" C. Schulte, said, "She had kept house in more outlandish places than most people have heard of." Dorothy was born in Iowa Park, Texas on April 9, 1922. She lived in Texas; Williams, Ariz.; Ash Fork, Ariz.; Daggett, Calif.; Honduras; and a myriad of other places. She moved back to Williams in 1969.

She volunteered and worked with numerous organizations including The Red Hat Society (RHS), Epsilon Sigma Alpha Service Organization (ESA), Williams Hospital Auxiliary, the ladies group from St. Joseph's Catholic Church, and the Professional Business Woman's Association (PBWA). She was named the PBWA Woman of the Year.

She was preceded in death by her mother, Lillian Wilson; her father, A.G. Wilson; and her husband of 59 years, John "Jack" C. Schulte.