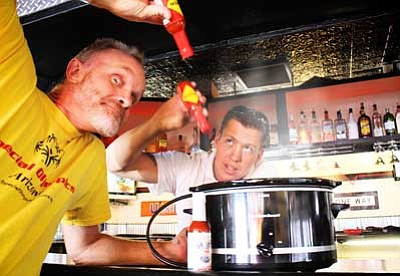 WILLIAMS - After a successful Kansas City Barbecue Society sanctioned barbecue contest this past summer, Chuck Vaughn and the Williams Main Street Association are back with another cooking competition, this time focusing on hot wings.

The Wicked Wing Throw Down, hosted by the NAzBBQ committee, is open to any competitors with an entrance fee of $25 and will take place Oct. 30 from 6-8 p.m. at Cruisers.

Vaughn said the event will help to raise funds for next year's summer barbecue contest. Half of the entrance fee "pot" will go to the winner of the event with the remainder put towards the summer cook-off.

"We're trying to do some little things to lead up to the big event coming up on the Fourth of July," Vaughn said. "We want to welcome everyone to participate from chefs to backyard cooks. I know I will be cooking up some wings. We're not limiting this one because even some of us that are on the barbecue committee, we want to do it."

All contestants must provide a "crock-pot" full of wings. Vaughn said cooks will be on the honor system - all wings must be of their own making and should be prepared the day of Oct. 30 and kept at a temp of 145 degrees, the holding temp for cooked foods that must reach a heat of at least 165 degrees.

Judging is open to any and all hot wing lovers for a minimal fee.

"For $5 you get a judging ticket," Vaughn said. "You walk around and try all the wings and then put your ticket in the container. That way, it's going to be like a people's choice vote."

Vaughn said the barbecue committee and Main Street Association hope to attract more people to Williams throughout the colder months.

Set up time will be from 5-6 p.m. Those interested in judging the event should arrive around 6 p.m.

The NAzBBQ committee plans to hold a Chili Cook-off at the Canyon Club in December in conjunction with their Christmas party. In March, a St. Patrick's contest will be held at Poncho McGillacuddy's.