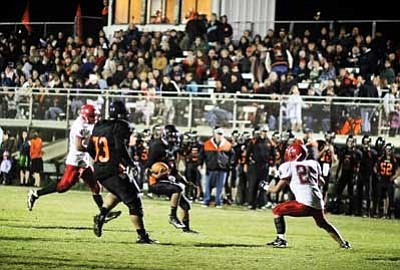 WILLIAMS - The Williams Vikings continue to march toward the post season with convincing wins against Valley-Sanders Oct. 1 and Red Mesa on homecoming Oct. 8.

The Vikes' running game has been the backbone of the team's offense all season with the last two games being no exception.

"We just stuck it to them," Brownlee said. "Our running game was fabulous. I wanted to throw a little bit, but the opportunity never came because our running game just worked so well."

"He was just phenomenal," Brownlee said.

Brownlee went on to say Valley-Sanders ran a unique offense that initially caused problems for the Vikes.

"Everything was really tight and they would run counters and stuff but, you know, our defense at times would bend but never break."

Valley Sanders scored their sole touchdown on their opening drive. Brownlee said some of his regular starters sat out the first quarter. The Vikings were also hindered by injuries.

"It's good to see our team overcome some adversity and still get out there and play some good football," Brownlee said.

Dallas Grantham ran for 68 yards and one touchdown. Darius Brown made it into the end zone with a 12-yard run and Elias Sammorano scored one touchdown while running 84 total yards on four carries.

The Vikes faced their toughest challenge of the season when they faced off against Red Mesa for homecoming.

Early in the first quarter, Brown ran for a three-yard touchdown, completing the extra point as well to go ahead 7-0. Jamal Drake followed with a 15-yard touchdown run of his own. The Vikes completed a two-point conversion on a pass from Doug Forbis to Adrian Solano, bringing the score at the end of the first quarter to 15-0.

Grantham scored on a three-yard run in the second quarter with Brown kicking an extra point.

Red Mesa answered with their only touchdown of the game. On the last play of the second quarter, Brown connected with Drake on a 30-yard touchdown pass followed by a failed two-point conversion to bring the score at the half to 28-6.

In the second half, Soria ran for a three-yard touchdown and a 10-yard touchdown. Two failed point after attempts brought the final score to 41-6.

"Red Mesa has basically been the number two team in the 2A North for years," Brownlee said. "Last year we traveled to their place and they handed it to us so it's kind of good to come back this year and set a tone early and hand it back to them."

Brownlee went on to say the game provided a solid mid-season test for his squad with the offensive team playing their best football of the season.

"We're right where we need to be," he said. "We're playing good football."

Mental mistakes may be the Vikes' weakest link, as the final games of the season will put them up against their toughest competition. The Vikings had 11 penalties against Red Mesa for 97 yards.

"When we go to St. Johns, we can't have those kind of mistakes," Brownlee said. "We've got to get over those mistakes. Obviously, we're sticking it to a lot of teams but we still have a long way to go. We're still learning our blocking schemes."

Grantham ran for 90 yards on 16 carries.

"It's good to see our fullback get some carries because that causes everybody to start closing in, and we can go outside. We've got a lot of good stuff in the middle."

On defense, the Vikings had three interceptions from Forbis, Drake and Solano.