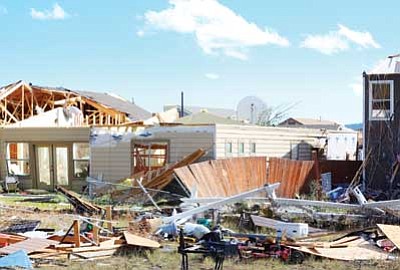 Ryan Williams/WGCN<br> Houses in the Flagstaff Meadows development sit in ruins after a tornado ripped through Bellemont.

The first of two tornados touched down at approximately 5:30 a.m., ripping through Camping World, an RV showroom and sales lot, and derailed dozens of rail cars on the south side of the interstate, before heading into the Flagstaff Meadows housing development on the north side of the roadway.

Ponderosa Fire Chief Mark Sachara said he arrived at the station house about 30 minutes after the first tornado touched down and had yet to hear a report of the incident.

"While we were sitting here at the station, we saw an additional tornado right across the street and everybody was thinking it was going to be a direct hit on our station and it ended up going a little west of the truck stop and that is when it knocked over power poles west of the truck stop," he said.

Despite the magnitude of the tornados, Ponderosa Fire Department responded to only a few injuries.

While injuries were limited, many residents lost their homes and most of their possessions.

Arizona Division of Emergency Management (ADEM) Preliminary Damage Assessment (PDA) teams visited the affected neighborhood on Thursday evaluating the scope of the damage. The agency reports 27 homes are uninhabitable, either permanently or temporarily. There are an additional 106 homes, both single-family and town homes that have suffered some extent of damage including missing shingles, broken windows and damaged siding.

ADEM Director Lou Trammell said the majority of those incurring home damage will be reimbursed.

"Good news is that most homeowners had insurance, which is the first line of defense in a disaster like this," he said.

Along with damage to residences, cars were destroyed throughout the neighborhood.

One of the hardest hit homes is owned by Lisa Kennedy. She and her husband Rex recently moved out of the home located at the north end of the development, renting the house to Carlos and Marisa Rojas Aug. 1.

The first tornado tore the roof off the house as the Rojas' and their two children attempted to scramble to safety. Before they could get off the bed debris fell on top of them, likely from another residence.

"We heard a really loud noise and my husband told us to get up and run," Rojas said. "We made it to the edge of the bed and that was that. The roof tore off. Stuff fell on us and we grabbed hold of that stuff to protect ourselves. It was really crazy."

Remarkably, nobody was hurt or flung out of the house, although their roof landed in the forest beyond the development.

"My legs are all cut up and my husband has a cut on his head but other than that we're good," Rojas said.

Kennedy said she is grateful everybody is safe. The home will be demolished and her insurance will likely cover the loss.

"Somebody asked me 'do you have tornado insurance?' and I had never heard of such a thing but this is a natural disaster so our insurance covers it," Kennedy said. "So far they are at least."

Coconino County is partnering with the United Way of Northern Arizona and the Voluntary Organizations Active in Disasters (VOAD) to assist residents with any unmet needs. Residents are encouraged to leave messages regarding tornado related issues at 1-888-679-8393. The United Way of Northern Arizona has established a Bellemont Tornado Fund to accept monetary donations.