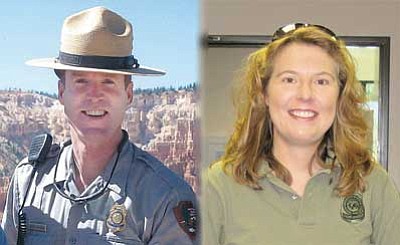 PAGE, Ariz. - On Oct. 8, a privately-owned Cessna 172 with two occupants left the Bryce Canyon Airport for a pleasure flight over Mount Dutton before returning to Page, Ariz. Early on the morning of Oct. 9, Glen Canyon National Recreation Area dispatch center received a report that the plane was overdue. Shortly thereafter, a search was initiated by Garfield and Kane Counties, the National Park Service and Classic Life Guard. At approximately, 8 a.m., MST Classic Life Guard located the plane in a rugged area known as Deep Creek on Mount Dutton in Dixie National Forest. Both occupants were killed in the crash.

According to Acting Glen Canyon Superintendent Kym Hall, "When you think about what rangers do every day and the frequency with which they put themselves in harm's way for the protection of visitors and park resources, it is a bitter irony that a recreational outing on a day away from work took the lives of two of our law enforcement rangers."

Dangling Rope District Ranger Laurie Axelsen was 41-years-old and had worked at Glen Canyon for over eight years. She was from Great Falls, Mont. and started with the National Park Service in 1989 as a Park Ranger at Mount Rainier National Park. Axelsen had previously worked at several national park units, including Olympic, Big Bend and Shenandoah National Parks. She is survived by her parents and a brother.

Both are survived by their National Park Service family and friends across the nation.

"There will be a tremendous hole in our organization with the loss of two such well-known and passionate people," said Superintendent Hall.