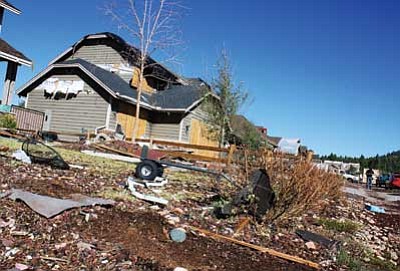 "This is looking more like a particularly unique event," Howard said.

Two tornados were confirmed in Bellemont. Northern Arizona averages 4-5 verified tornados per year although Howard said that many more likely go unreported. These tornados are smaller, shorter in duration and narrower in their damage path.

"We know at this point for instance that the tornado that went through Flagstaff Meadows, we have it at least as far south as well down Woody Mountain Road, almost down toward Secret Mountain Wilderness and all the way north to the point where it crossed highway 180 up toward Hart Prairie," Howard said. "It wasn't a continuous damage path but there is trackable damage all along there. It would hop scotch a bit from one spot to the next."

The storms that produced Wednesday's tornados traveled at approximately 40-45 mph and tracked from south-southwest to north-northeast.

Howard said a fair amount of moisture to the south heading into Tuesday night coupled with a strong low-pressure system centered over southern California helped create the instability that caused the thunderstorms and tornados.

"It's a matter of all of the relevant factors coming together in a specific place," he said. "We actually had wind speeds aloft in excess of 110 miles per hour and that particular feature provided significant lift."

Howard went on to say thunderstorms in the summer months are often initiated by intense surface heating causing instability in the lower part of the atmosphere. Wednesday's storms were different. Cold air introduced aloft as well as lift provided by strong winds high in the atmosphere were the tornados' prime instigators.

"We were de-stable from the top down rather than from the bottom up," Howard said. "Even though it was a cool, damp day down here at the surface, there was still plenty of instability above us to allow for the vertical development of both thunderstorms and the tornados."

Not all of the storm damage was cause by the twisters touching down. An overturned tractor-trailer rig near the Parks rest area in the eastbound lanes was likely the result of exceedingly strong winds.

"Our best estimate at this point is that particular vehicle being blown over was the result of straight line winds associated with some of these storms," Howard said.