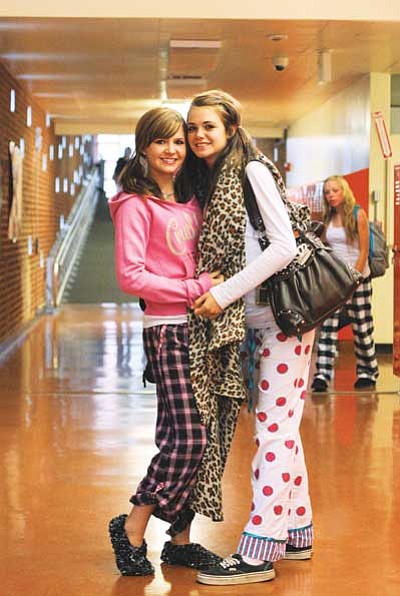 WILLIAMS - Viking spirit will be on display this week as students at Williams High School celebrate homecoming with an action packed schedule of events including a parade, bonfire and homecoming games against Red Mesa and Seligman.

And dress up days.

Students will compete all week to determine which class, freshman, sophomore, junior or senior, has the most Viking spirit.

The homecoming parade down Route 66 begins at 1:30 p.m. This year's theme is "Vikings Get Their Game On." All floats will incorporate board game or video game elements.

"They can build things but nothing goes on the floats until Monday," Fleishman said.

"Dark-thirty is when the bonfire takes place," Fleishman said. "Somewhere in the neighborhood of 7:30 p.m. The kids start showing up at 7 p.m."

The Lady Vikings volleyball team takes on Seligman at 4 p.m. Friday followed by the Vikings football homecoming game against Red Mesa at 7 p.m. The coronation and crowning of homecoming royalty takes place at half time.

Fleishman said being selected to be part of homecoming royalty is a once in a lifetime, prestigious experience.

"They are representing their class," Fleishman said. "It's a great honor for the freshman, sophomores and juniors. Those are the two people that their peers picked to represent them in this scenario. In terms of your senior candidates, which will ultimately be the homecoming king and queen, again it is quite an honor. The student body will pick out of those three ladies and three gentlemen who they wish to represent the school. I expect them to act in a respectful and dignified fashion during these ceremonies. I've never had a problem."

The homecoming dance begins in the gym immediately after the game and runs until Midnight. Eddie Miller from 93.9 the Mountain will DJ the event.

According to Fleishman, homecoming is a time to celebrate and remember.

"We hope you come and support the Vikings," he said. "They are having a tremendous season. What better way to come home and remember the good times than come home and visit a team that has had a phenomenal winning streak."

Fleishman went on to say he hopes the community will rally behind the Vikings all week long.

"Anything people can do to help push school spirit from the community's end is greatly appreciated," he said. "Signs in store windows. Anything vendors want to do to help. Vikings specials. Go Vikings. We're still small enough that we can do those things and we want to remind people that we really appreciate it when they do."