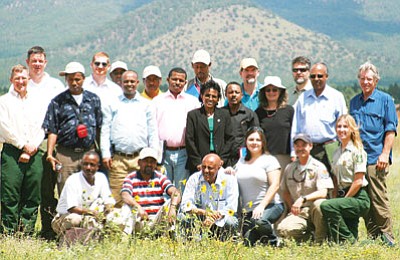 WILLIAMS - The Kaibab National Forest hosted a 14-person delegation from the government of Ethiopia on Aug. 23 in order to provide information about the operational aspects of disaster management in northern Arizona.

The delegation members all hold high-level positions in various land, resource, water and emergency preparedness agencies in Ethiopia. They were hosted on a 15-day study tour of Arizona, Idaho and California by members of the U.S. Forest Service International Programs office out of Washington, D.C.

"I must say, the Ethiopian delegation was very impressed by the level of effort everyone at the Kaibab National Forest exerted," said Brehan Doud, who accompanied the group as a representative of Forest Service International Programs. "The day was comprised of many important issues, all affecting Ethiopia in one way or another."

To meet those requests, Kaibab National Forest managers arranged for several presentations and took the delegation to visit sites on the Williams Ranger District. Dave Mertz, fire staff officer for the Kaibab National Forest, provided an overview of the Incident Command System, which is a systematic tool used for the command, control and coordination of emergency response.

"As it turns out, they deal with some very similar issues in Ethiopia to what we have here in northern Arizona. For example, they deal with drought and flooding frequently," Mertz said. "We tried to tailor the time they spent with us to be most beneficial to their issues and concerns."

Mayor John Moore and Interim City Manager Joe Duffy from the city of Williams met the group at Santa Fe Dam in Williams and discussed water and drought issues. Kevin Boness of the Arizona State Forestry Division provided information on the roles of various agencies during emergencies such as the Eagle Rock Fire, which burned 3,420 acres in June about 11 miles northeast of Williams.

During a visit to the site of the Eagle Rock Fire, Dave Bales, assistant fire management officer for the Williams and Tusayan ranger districts, and Kit MacDonald, Kaibab National Forest soil scientist, showed delegation members the effects of the fire, discussed the fire suppression effort, and provided an overview of the Burned Area Emergency Rehabilitation (BAER) work that had been completed. BAER efforts, such as rerouting storm runoff, felling trees on steep slopes, and aerial seeding, were done to stabilize soils in the burned area and reduce the potential for flooding and mudslides.

"The delegation found the field trip to the site of the Eagle Rock Fire very informative," Doud said. "The presentation describing the practice of controlling the fire sparked many questions, fostering continued conversation on the matter."

Bruce Greco of the Ecological Restoration Institute at Northern Arizona University shared information about the Schultz Fire, which burned 15,075 acres north of Flagstaff, and the need for forest restoration in order to reduce the potential for large, high-intensity wildfires. Sherrie Collins, Coconino County Emergency Services, provided additional insight into emergency operations related to the Schultz Fire and subsequent flooding.

Finally, the delegation members were treated to a tour of the National Weather Service office in Bellemont, and were given a presentation on early warning systems by George Howard, warning coordination meteorologist.

"The delegation seemed very well informed on every topic we discussed with them," Mertz said. "They had a lot of great questions for us, and we hope they left with information they can use back at home."