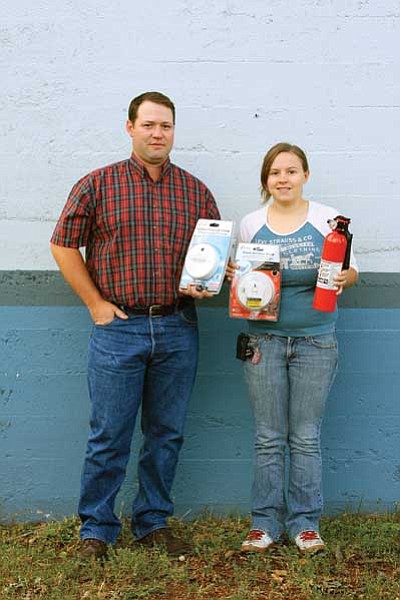 WILLIAMS - This week is National Fire Prevention Week but the Williams Volunteer Fire Department (WVFD) plans to emphasize fire safety for the better part of the month with school assemblies, fire drills and a fire station open house.

The National Fire Protection Association's official theme is "Smoke Alarms: A Sound You Can Live With!"

"There is a study out that kids don't hear smoke alarms," she said. "A smoke alarm goes off and kids aren't getting out of bed. Parents stood back and watched all this set up on camera. Kids looked up, looked around and went back to sleep."

Raycraft said many older houses have fire hazards residents should be aware of, primarily due to aging electrical systems. If homeowners are unsure whether their residence is particularly hazardous, Raycraft encourages them to call the fire department to schedule a home visit.

"We can also install smoke alarms for anyone unsure of how to do it," she said. "We tell people where they should install smoke alarms. Like, don't put a smoke detector in your kitchen because every time you fry bacon it is going to smoke. Set it in a room away. Put one in all the kids' rooms."

Firefighters will be on hand Oct. 21 at the 21st Century After School Program at 2:30 p.m. to present a program entitled "Don't Be Afraid of Firefighters" to K-3 students. The same program will also be presented Oct. 13 to children enrolled in Headstart at 8:30 a.m. and 1 p.m.

"A lot of the younger kids are afraid of firefighters," Raycraft said. "We're going to let them explore fire trucks and let them get used to our gear. Maybe let some of them wear some of our gear."

An open house at Fire Station No. 1 will be held Oct. 23 from 11 a.m.-2 p.m. Raycraft said free barbecue will be available along with station and fire truck tours. The event will provide a great opportunity for younger kids to learn about the importance of fire safety as well as have a fun time with Smokey the Bear, likely in attendance.

With a new Arizona law allowing the use of consumer grade fireworks recently signed by Governor Jan Brewer and going into effect Dec. 1, Raycraft said the WVFD hopes to emphasize fireworks safety as well over the course of the month.

"This year it's all about smoke alarms but we're taking it to a different level," she said. "We're doing fireworks."

The WVFD along with Williams Police Department Officer Bob McCarty plan to present a "Danger of Fireworks" presentation at the Williams Middle School during the week of Oct. 18.

With the passing of the new law, WVFD Chief Jeff Dent said many types of fireworks will now be legal.

"Pretty much anything that doesn't shoot through the air," Dent said.

Raycraft said she hopes younger kids understand the inherent danger of all fireworks, including sparklers.

"It is mostly going to be kids that aren't going to use common sense with fireworks," she said. "The earlier we can get them to where they are still old enough to understand, the better."